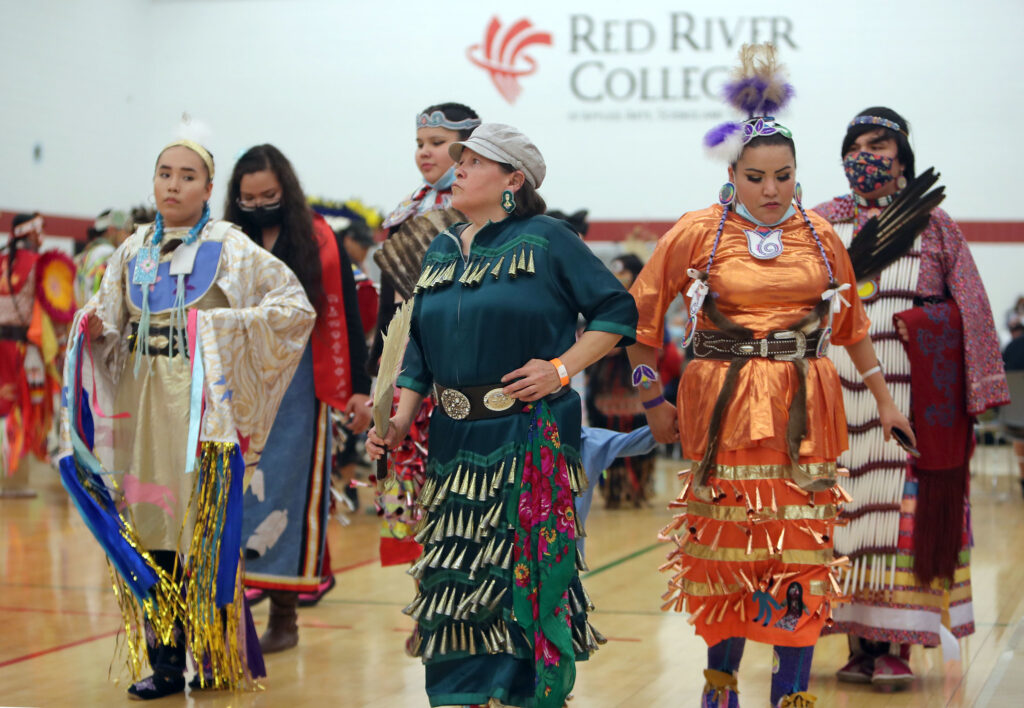 A time to honour and learn

June is National Indigenous History Month, a time dedicated to honouring the vibrant history, culture, strength and diversity of First Nations, Inuit, and Métis Peoples across Canada. What better time to take advantage of the latest new arrivals in the Library’s Indigenous section?

These timely resources offer the opportunity to broaden your understanding of the experiences and perspectives of Indigenous Peoples. Many thanks to Sarah Lee for maintaining the Library’s Indigenous Collection.

New arrivals to our Indigenous collection

Indigenous women across North America resound in this book. #Not Your Princess presents an eclectic collection of poems, essays, interviews, and art that combine to express the experience of being a Native woman.

Tasha Spillet’s graphic-novel debut, Surviving the City, is a story about womanhood, friendship, resilience, and the anguish of a missing loved one. Miikwan and Dez are best friends. Miikwan’s Anishinaabe; Dez is Inninew. Together, the teens navigate the challenges of growing up in an urban landscape – they’re so close, they even completed their Berry Fast together.

Returning to Ceremony is the follow-up to Chantal Fiola’s award-winning Rekindling the Sacred Fire and continues her ground-breaking examination of Métis spirituality, debunking stereotypes such as “all Métis people are Catholic,” and “Métis people do not go to ceremonies.”

Me tomorrow: Indigenous views on the future / compiled and edited by Drew Hayden Taylor.

First Nations, Métis and Inuit artists, activists, educators and writers, youth and elders come together to envision Indigenous futures in Canada and around the world. Discussing everything from language renewal to sci-fi, this collection is a powerful and important expression of imagination rooted in social critique, cultural experience, traditional knowledge, activism and the multifaceted experiences of Indigenous people on Turtle Island.

The hilarious story of an unlikely group of Indigenous dancers who find themselves thrown together on a performance tour of Europe in 1972. The Tour is all prepared. The Prairie Chicken dance troupe is all set for a fifteen-day trek through Europe, performing at festivals and cultural events. But then the performers all come down with the flu. And John Greyeyes, a retired cowboy who hasn’t danced in fifteen years, finds himself abruptly thrust into the position of leading a hastily-assembled group of replacement dancers.

A graphic-novel adaptation based on the work of one of Canada’s most revered and bestselling authors. “What side do you come from?” On a trip to visit his older sister, who moved away from the family home to Salt Lake City, a young boy and his mother are posed a simple question with a not so simple answer. And when border guards will not accept their citizenship, mother and son wind up trapped in an all-too-real limbo between nations that do not recognize who they are.

We remember the coming of the white man / editors: Sarah Stewart and Raymond Yakeleya; authors: Walter Blondin [and others].

A work in progress since the 1970s, We Remember the Coming of the White Man chronicles the history of the Dene People in the extraordinary time of the early 20th century. Chapters are transcripts of oral histories of ten Elders.

My privilege, my responsibility: a memoir / Sheila North.

In September 2015, Sheila North was declared the Grand Chief of Manitoba Keewatinowi Okimakanak (MKO), the first woman elected to the position. Known as a “bridge builder”, North is a member of Bunibonibee Cree Nation. North’s work in advocacy journalism, communications, and economic development harnessed her passion for drawing focus to systemic racism faced by Indigenous women and girls.

We all go back to the land: the who, why, and how of land acknowledgements / Suzanne Keeptwo.

Land Acknowledgements often begin academic conferences, cultural events, government press gatherings, and even hockey games. They are supposed to be an act of Reconciliation between Indigenous people in Canada and non-Indigenous Canadians, but they have become so routine and formulaic that they have sometimes lost meaning. Métis artist and educator Suzanne Keeptwo sees the Land Acknowledgement as an opportunity for Indigenous people in Canada to communicate their worldview to non-Indigenous Canadians–a message founded upon Age Old Wisdom about how to sustain the Land we all want to call home.

Did you see us?: reunion, remembrance, and reclamation at an urban Indian residential school / Survivors of the Assiniboia Residential School ; [edited by Andrew Woolford, Morgan Fontaine, and Theodore Fontaine].

The Assiniboia school is unique within Canada’s Indian Residential School system. It was the first residential high school in Manitoba and one of the only residential schools in Canada to be located in a large urban setting. Stitching together memories of arrival at, day-to-day life within, and departure from the school with a socio-historical reconstruction of the school and its position in both Winnipeg and the larger residential school system, Did You See Us? offers a glimpse of Assiniboia that is not available in the archival records.

Nothing will be different: a memoir / Tara McGowan-Ross.

A neurotic party girl’s coming-of-age memoir about learning to live before getting ready to die. Tara has it pretty good: a nice job, a writing career, a forgiving boyfriend. She should be happy. Yet Tara can’t stay sober. She’s terrible at monogamy. Even her psychiatrist grows sick of her and stops returning her calls. She spends most of her time putting out social fires, barely pulling things off, and feeling sick and tired. Then, in the autumn following her twenty-seventh birthday, an abnormal lump discovered in her left breast serves as the catalyst for a journey of rigorous self-questioning.

Dadibaajim narratives are of and from the land, born from experience and observation. Invoking this critical Anishinaabe methodology for teaching and learning, Helen Agger documents and reclaims the history, identity, and inherent entitlement of the Namegosibii Anishinaabeg to the care, use, and occupation of their Trout Lake homelands.

Indian in the cabinet: speaking truth to power / Jody Wilson-Raybould.

A compelling political memoir of leadership and speaking truth to power by one of the most inspiring women of her generation. This is the story of why Wilson-Raybould got into federal politics, her experience as an Indigenous leader sitting around the Cabinet table, her proudest achievements, the very public SNC-Lavalin affair, and how she got out and moved forward.

Intimate integration: a history of the Sixties Scoop and the colonization of Indigenous kinship / Allyson D. Stevenson.

Privileging Indigenous voices and experiences, Intimate Integration documents the rise and fall of North American transracial adoption projects, including the Adopt Indian and Métis Project and the Indian Adoption Project. Making profound contributions to the history of settler-colonialism in Canada, it sheds light on the complex reasons behind persistent social inequalities in child welfare.

An indigenized, de-colonized world view for Indigenous leaders and academics seeking a path to reconciliation. Authors makwa ogimaa (Jerry Fontaine) and ka-pi-ta-aht (Don McCaskill) tell their di-bah-ji-mo-wi-nan (personal stories) to understand the cultural, political, social, and academic events in the past fifty years of Ojibway-Anishinabe resistance in Canada.

These are the stories: memories of a 60s Scoop survivor / Christine Miskonoodinkwe-Smith.

A collection of essays from a 60’s Scoop Survivor.

A story of love, heartbreak, and tragedy, Home Waltz delves into suicide, alcohol abuse, body image, and systemic racism. A coming of age story like no other, Home Waltz speaks to one Indigenous teenager’s experience of growing up in a world that doesn’t want or trust him.

Life in the city of dirty water: a memoir of healing / Clayton Thomas-Müller.

An electrifying memoir that braids together the urgent issues of Indigenous rights and environmental policy, from a nationally and internationally recognized activist and survivor. Tying together personal stories of survival that bring the realities of Canada’s First Nations into sharp focus, and lessons learned from a career as a frontline activist committed to addressing environmental injustice at a global scale, Thomas-Müller offers a narrative and vision of healing and responsibility.

Drawing on both lived experience and cultural memory, Norma Dunning brings together six powerful new short stories centred on modern-day Inuk characters in Tainna. Ranging from homeless to extravagantly wealthy, from spiritual to jaded, young to elderly, and even from alive to deceased, Dunning’s characters are united by shared feelings of alienation, displacement and loneliness resulting from their experiences in southern Canada.

Daughters of the deer / Danielle Daniel.

In this haunting, groundbreaking, historical novel, Danielle Daniel imagines the lives of her ancestors in the Algonquin territories of the 1600s, a story inspired by her family link to a girl murdered near Trois-Rivières in the early days of French settlement.

From Governor-General’s Award-winning writer David A. Robertson comes this special edition of the timeless graphic novel that introduced the world to the awe-inspiring resilience of Betty Ross, and shared her story of strength, family, and culture.

The trail of Nenaboozhoo and other creation stories / Bomgiizhik; illustrated and edited by Christi Belcourt.

This collection presents legends of Nenaboozhoo, the Ojibway creator spirit, along with other creation stories; sacred stories which were transcribed from the oral storytelling of Isaac Murdoch. The Trail of Nenaboozhoo and Other Creation Stories is a book of art and storytelling that preserve the legends of the Anishinaabe people.

Through the profound lessons of the seven Grandfather Teachings, architect Vivian Manasc came to understand that the process of planning and designing a building should be a circle, with the beginning and end of the story linked together. The stories Vivian tells in Old Stories, New Ways are also framed by these teachings of Courage, Love, Wisdom, Respect, Truth, Humility and Honesty, with each teaching illuminating an aspect of how working with Dene, Cree, Saulteaux, Métis, Inuit and Inuvialuit communities has influenced her design practice.

Have a comment or question? Connect with the Library!

You may reach us through our Ask Us chat, our Ask a Question form, or visit one of our service desks during regular Library hours. We would love to hear from you!

Drop-In Help Desks: Ready to Help When you Need Them

Inclusion Week: “Guiding” You To Resources