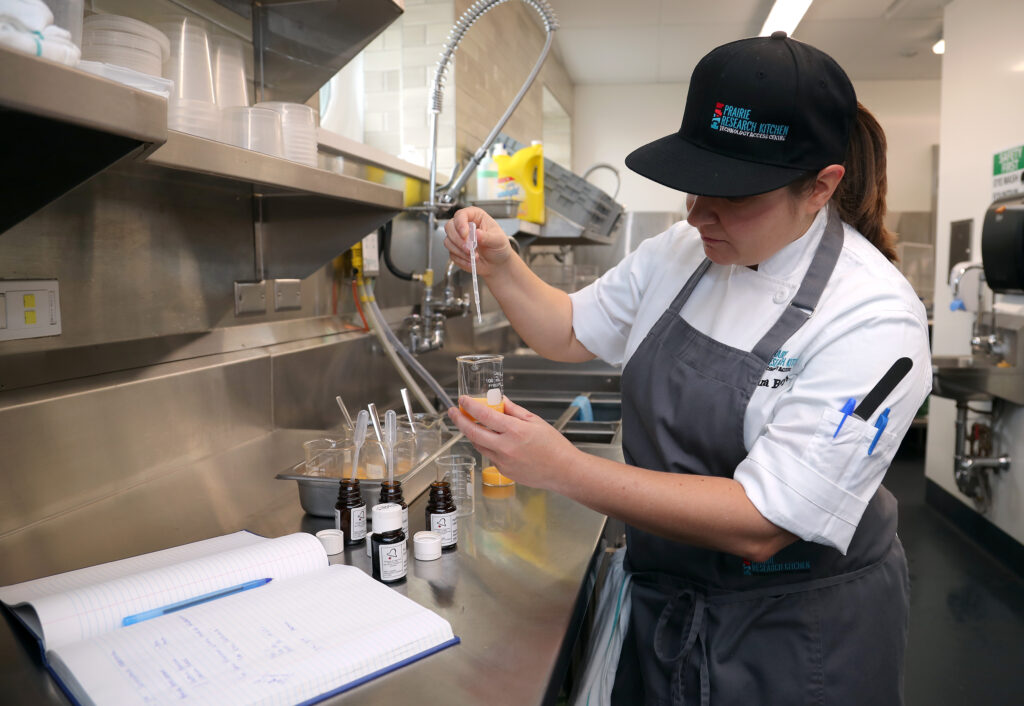 Proof is no longer exclusively in the pudding that the term upcycling is here to stay – it can now be found in a nutritious blueberry pancake or rich chocolate brownie made from a mix using saved coffee grounds and the remnants of brewing a cold beer. It may sound like sorcery but transforming these previously discarded by-products into tasty treats is not the work of a magician, but that of an entrepreneur.

However, he couldn’t have done it alone.

President of GroundUp eco-ventures, Shawn Leggett didn’t invent the idea of upcycling, but he did see an opportunity and had the time to do some research when his work in Alberta’s oil and gas industry slowed.

“People’s mindsets are shifting. They care about the future of the planet, they want sustainable food options and they’re willing to pay for it, providing it tastes great,” says Leggett.

After months of collecting waste material from local businesses, dehydrating it in his oven at home, and experimenting with recipes and processes, he was ready to take his creation to the next level.

But even with a solid concept, a passionate belief, and an unrelenting work ethic, Shawn needed expertise, resources and a facility, all of which he found at RRC Polytech’s Prairie Research Kitchen (PRK).

“We experimented enough to know we had something worth pursuing but going from a good idea to a great item is such a huge leap,” he says. “Time is money, so you want to move quickly but as a start-up actual money is still an obstacle – PRK offered us a cost-effective solution to professional research and development.”

GroundUp eco-ventures enlisted PRK to support the development of an eco-friendly, locally sourced, high protein, instant pancake mix made with brewers’ by-products and a brownie mix made with used coffee grounds.

Culinary Research Manager, Heather Hill jumped at the opportunity to demonstrate the transformative powers of her team and provide Shawn with a marketable product that would lead to a significant return on his investment.

Research Assistant, Anna Borys was tasked with perfecting a useful, upcycled flour using a base of brewer’s spent grains (BSG) and saved coffee grounds (SCG). Borys was confident she could overcome the project’s main challenge of reducing the gritty texture that comes with such a high fibre material and embarked on weeks of trials and testing to prove it.

Her analysis of extensive sieving trials and multiple ingredient combinations led to a formulation that improved the functionality of BSG flour – from there, the entire PRK team worked together with GroundUp on tasting trials.

Dozens of samples of each baking mix and hundreds of pancakes, waffles, and brownies later, a refined recipe and optimal cooking procedure emerged, as well as feedback and recommendations for future products.

“Everything we do at PRK requires a team effort because scientists and chefs have different approaches and priorities when it comes to food,” says Borys. “Our ultimate goal is to strike the perfect balance between science and art so it’s incredibly rewarding when we reach a consensus and the final product functions well, looks appealing, and tastes great.”

Better Breakfast High-Protein Pancake Mix and Born Again Brownie Mix won gold for innovation of the year at the SIAL Montreal tradeshow in April 2022. Their success at Canada’s largest food industry exhibition with over 1200 exhibitors from 50 different countries established the GroundUp eco-ventures brand and prompted orders to roll in.

“It’s mind blowing how quickly our upcycling concept transformed into an award-winning product after we tapped into the incredible resources at Prairie Research Kitchen,” says Leggett. “Combining their technical knowledge with our passion and energy allowed the team to perfect our idea and we are shattering all projections.”

GroundUp’s successful venture is a source of pride but not of shock for Anna Borys, because finding innovative and creative solutions is just part of the daily routine at PRK. While the results can appear quite magical, it’s not a trick or an illusion – just another example of RRC Polytech living its commitment to use the power of partnership to elevate people and industry.