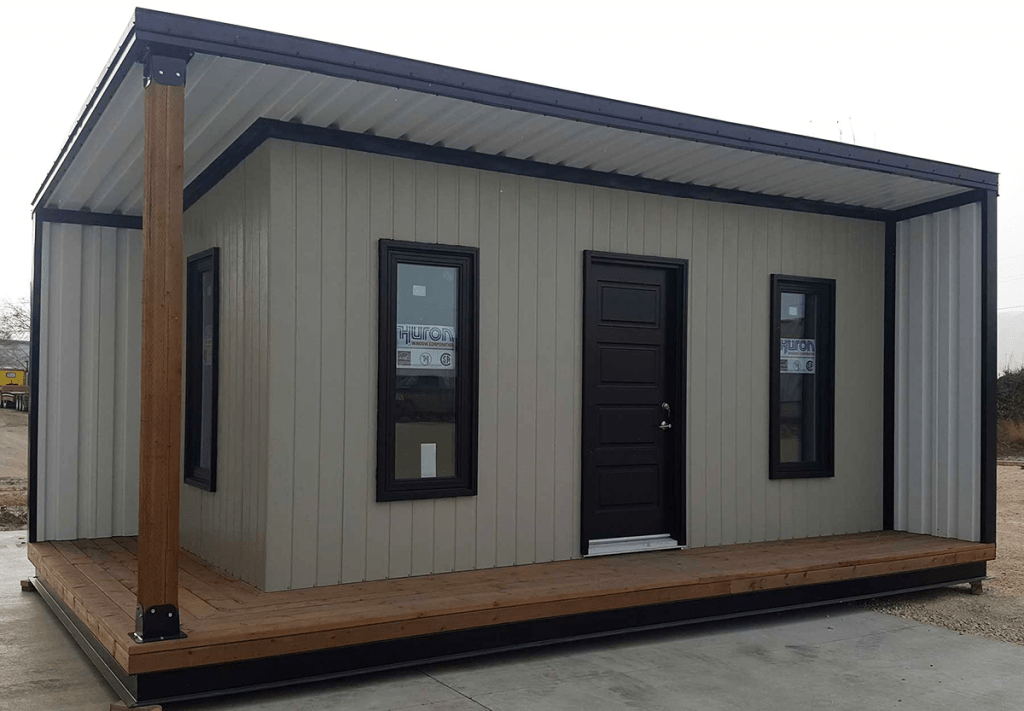 Artspan Inc. (Artspan) is a company based out of Winkler, MB, that designs, manufactures, and distributes structurally insulated panels (SIP). Artspan provides a one-step building envelope solution for residential, commercial, and industrial applications.

The company had previously conducted airtightness testing on completed houses, thermal testing on its insulation foam, and a variety of fire and structural testing. The Building Efficiency Technology Access Centre (BETAC) at Red River College performed further testing through an Engage Grant project, with financial support from the Natural Sciences and Engineering Research Council of Canada (NSERC).

The Engage Grant project with Artspan took place between 2018 and 2020, with the objective of conducting a performance assessment of the company’s panelized system and window installation details. Testing was broken down into three parts: air leakage and water penetration, air tightness and energy modelling, and thermal performance assessment. 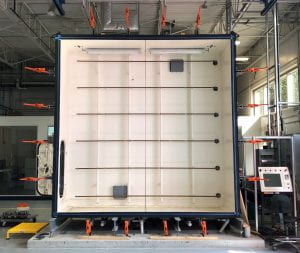 As mentioned, Artspan had previously conducted tests on its structurally insulated panels; However, testing of the panel joints (wall-to-floor, panel-to-panel, and floor-to-ceiling) and the window-wall interfaces had been limited. Resistance to air and water infiltration at these points is critical in cold and mixed climate zones, with regards to the building envelopes’ durability and its energy efficiency.

The overall objectives of the tests were two-fold:
a) To measure the airtightness of the office building built with Artspan SIP panels both during and post-construction.
b) To expand the general knowledge base on the airtightness characteristics of commercial-style buildings in Manitoba.

Air leakage in a building can never be eliminated. However, it can be managed and controlled within limits to minimize several potential issues, including:

BETAC’s research personnel conducted the Standard Test Method for Measuring the Air Leakage Rate of a Large or Multizone Building, with two airtightness tests using the Envelope Protocol. The first test was conducted during construction – building was near completion with installed windows, drywall, and HVAC. The second airtightness test was conducted once the building had been completed, transported to its location, and was occupied.

Test results of the Artspan Inc. office building air tightness and energy modelling were plotted alongside values for various new and existing commercial buildings in Manitoba.

The final portion of the Artspan project was conducting a thermal performance assessment of the insulation used in their SIP. The purpose of this testing was to compare results from newly produced samples (one month) to aged samples (six years).

Four samples were provided for thermal testing – two aged for one month, and two aged for six years. The Netzsch Heat Flow Meter was used to test the panel foam by determining the thermal resistance of each insulation sample.

After the Engage Grant project was complete, BETAC research staff had an Interactive Visit with Artspan to conduct additional thermal testing on different versions of their panel foam. 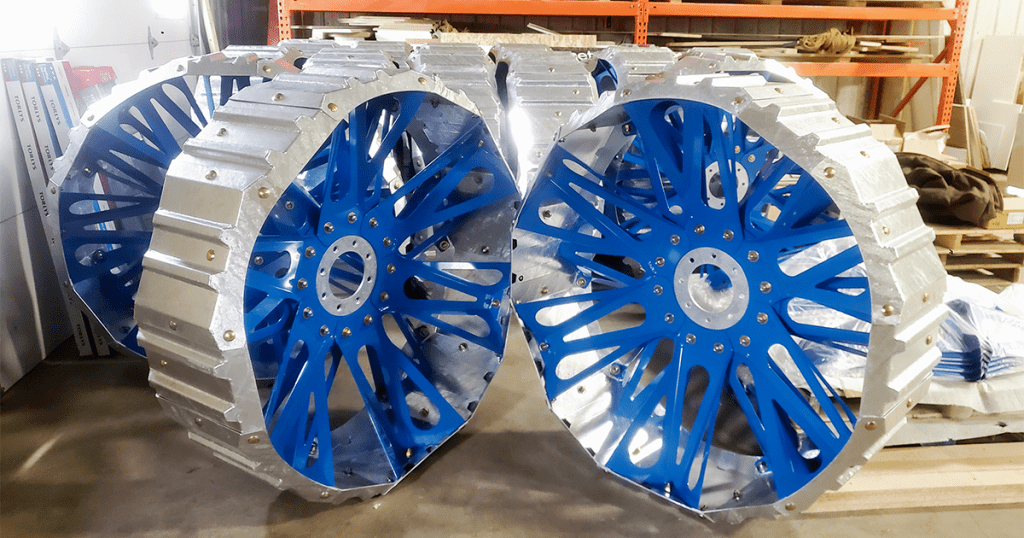 Typically, agricultural irrigation systems use wheels with a steel rim and an air-filled rubber tire. As with most rubber tires, they are prone to losing air pressure, wearing out, and cracking over time. Rubber tire wheels are also difficult and time consuming to replace on large irrigation systems, causing significant downtime while the equipment is under repair.

Cascade Manufacturing (Cascade), located in MacGregor, Manitoba, designs and fabricates agricultural irrigation products, and saw an opportunity to improve the traditional irrigation system wheel. After creating a prototype for a low-maintenance, all-steel bolted wheel, Cascade worked with the Technology Access Centre for Aerospace and Manufacturing (TACAM) at Red River College to perform a design review to identify and address high mechanical stress areas and potential points of failure.

In order to perform the review, Cascade provided 3D CAD files of their newly designed bolted wheel to TACAM for analysis. The TACAM research team used in-house expertise in 3D modelling and finite element analysis (FEA) to evaluate the stresses throughout the wheel in accordance with design allowable limits.

Cascade used the recommendations provided to redesign the bolted wheel and engaged TACAM to re-evaluate the new design for verification purposes. TACAM provided recommendations for design improvement and cost reduction based on findings. The original bolted wheel failed under 10,000 load cycles, versus the newly designed bolted wheel is expected to last more than 200,000 cycles. The improved bolted wheel design is currently being manufactured and promoted for local and export sales. 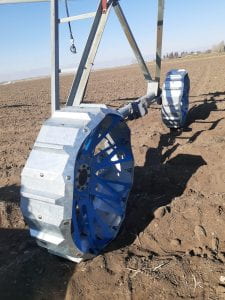 • Enhanced competitiveness and innovation, and potential for an increased local and international customer base

If not for our experience with TACAM, we likely wouldn’t have determined that the grade of steel used on our wheels was prone to low cycle fatigue. With TACAM’s expertise on how to minimize stress concentration points, we were able to produce a bolted wheel with thinner grade material than we thought possible. The FEA study they conducted determined that the stresses are within tolerance, which gave us confidence to manufacture and test the product in field conditions. Overall, we are very satisfied with the results from the bolted wheel project with TACAM. -Matt Waldner, Cascade Manufacturing 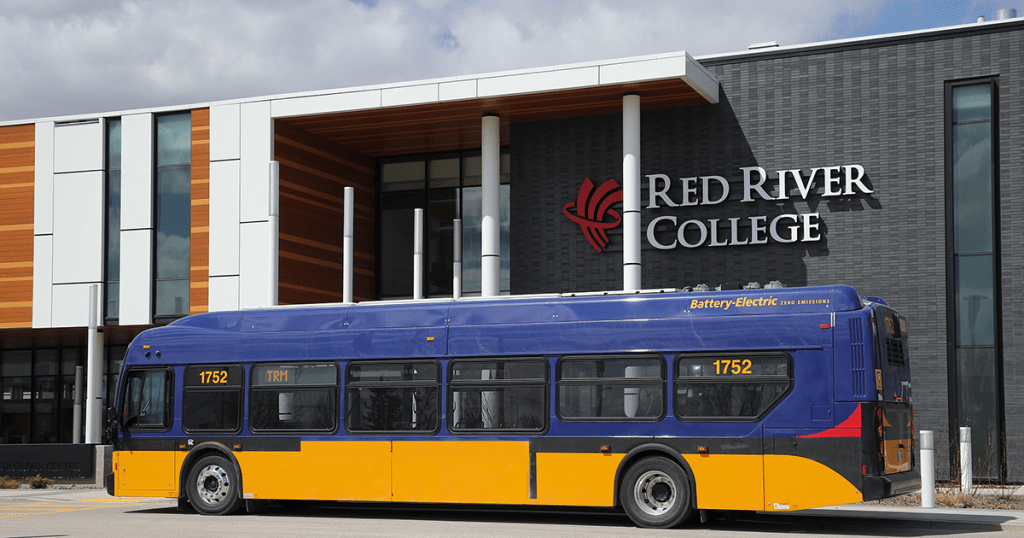 The rise of clean tech and electric vehicles is much more than a trend – it represents a long-term, sustainable solution to lessening environmental impact by reducing emissions and fuel consumption. As industries adopt electric vehicles, the need for specialized training has increased. The Vehicle Technology & Energy Centre (VTEC) at Red River College (RRC) is a hub for applied research, technical services as well as training for electric and hybrid vehicles.

“RRC was part of the Joint Task Force on Transit Electrification, which assessed the economics and the greenhouse gas emission profiles for electric transit buses (e-buses) relative to diesel buses,” says Jose (Jojo) Delos Reyes, Research Manager, VTEC. “One key component of integrating e-buses into the current fleet is providing training. This is where we saw an opportunity to approach Winnipeg Transit about supplemental training courses.”

Currently New Flyer Industries (New Flyer) provides an intensive e-bus course to transit maintenance technicians across North America. While this training is immersive, the VTEC team saw a need for reskilling and upskilling transit mechanics and technicians in preparation for the New Flyer course.

“For those who have previous experience working with electric buses or vehicles, they may be able to jump right into the manufacturer training. However, a diesel mechanic who has never worked on an electric vehicle, for example, may benefit greatly from supplemental learning,” says Delos Reyes.

A group from the RRC transportation department took the New Flyer e-bus course to determine where knowledge gaps might exist and what information and training would be a beneficial precursor to this course. The overall goal was to develop specialized training to prepare technicians and set them up for success.

“The transition to electrification brings a rapid shift in safety and technology that our technicians need to be prepared for. This course will introduce technicians to the high voltage electric vehicle systems needed to support both battery electric and fuel-cell battery electric vehicle technologies, and prepare them for the more in-depth manufacturer training,” says Eric Rensfelt, Vehicle Systems Supervisor, Winnipeg Transit. “Safety is paramount, and technicians will need to be comfortable working with the new technology, as well as be able to diagnosis the complex systems through Programmable Logic Controller (PLC) programming and ladder logic. The partnership between Winnipeg Transit and Red River College resulting from this course is the first step in this process.”

The first RRC e-bus training course was slated to start in May 2020, but due to the pandemic, the brakes were temporarily put on the project.

This spring, the first group of trainees completed The Intro to Electric Bus Technology course. As highlighted in the course description: completing this course will provide the strong electrical foundation required for transit technicians to successfully complete the in-depth manufacturer electric bus training, and in turn upskill members of Manitoba’s workforce. 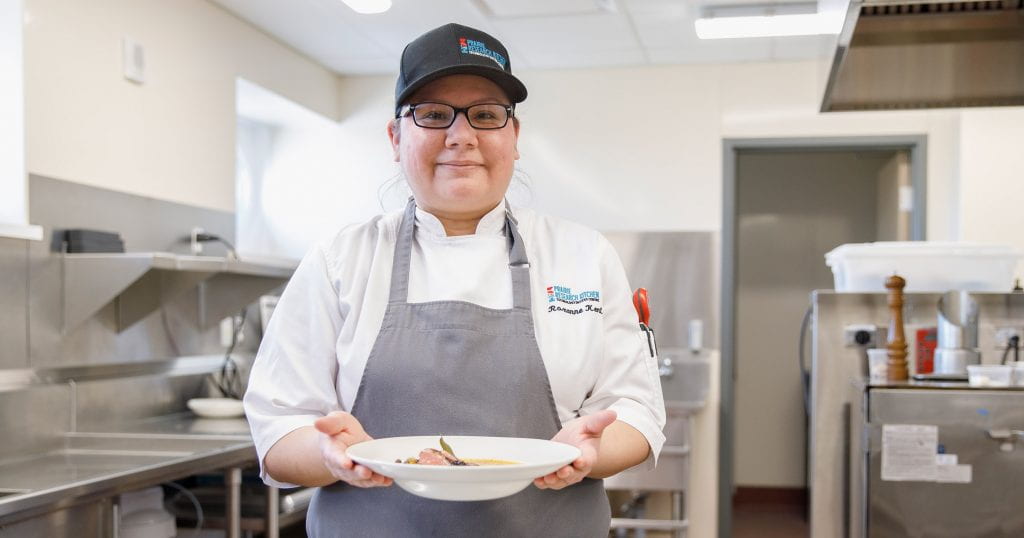 This past November, Roxanne Kent joined the Prairie Research Kitchen team as the Indigenous Research Assistant, where she uses her acquired culinary skills to support product development projects. Roxanne graduated Culinary Arts in February 2021 with honours and won various awards, including one for a recipe she developed for Manitoba Pork Producers. She is currently working on an individual research project highlighting indigenous and local ingredients.

“I was asked to create a recipe for something to share with guests at the Prairie Research Kitchen. I knew I could come up with pretty much anything, so it was hard to narrow it down. I finally decided on creating a blueberry sauce,” said Roxanne.

Initially, she was thinking about potentially creating crackers or chips as whatever she made had to be shelf stable. Roxanne decided to build off the mustard she had previously created, to develop a rich, flavourful blueberry sauce.

While developing the recipe, Roxanne wanted something that would pair well with gamey meats such as bison, duck, and venison, or could be used to top toast and pancakes. The recipe features wild blueberries, a blend of birch and maple syrup for sweetness, and an infusion of sweetgrass.

“Sweetgrass is used as traditional medicine but has also been used as tea or in a marinade. I worked with Research Chef, Kyle Andreasen, to get his perspective on how to incorporate this ingredient. We first toasted the sweetgrass, then steeped it in vinegar.”

After developing and finalizing the recipe, it came time to give the blueberry sauce a name. The name is connected to Roxanne’s lineage – she is Ojibway from the Wabaseemoong Independent Nations in northwestern, Ontario. In Anishinaabemowin (Ojibwe) the name of Roxanne’s blueberry sauce, Wenoodizii Magan Miinan Apagajiganan, means: ”The rich flavour of blueberry that you can put on top of something.”

Roxanne prepared an initial sampling of her sauce with meatballs for Corey. After finalizing the recipe, she served the sauce with a duck dish to help him experience the flavour.

“Jamie Chahine, Indigenous Research Liaison at the Research Kitchen, brought me tobacco and asked if I would help select the name for Roxanne’s blueberry sauce. Experiencing the flavour helped inform how it would be best described in the Anishinaabemowin language,” said Corey. “Forty-five years of language and memories of dipping bannock in jam and sauce with my grandmother came together in naming this sauce.”

Connecting with community is especially important to Roxanne. In addition to a Culinary Arts diploma, she obtained a social work degree in 2015. One of her long-term goals is to work with low-income families and teach them how to cook nutritious meals. She enjoys the challenges of creating and developing new recipes, and finds it rewarding to be able to apply what she has learned in her craft.

Roxanne’s wild blueberry sauce makes for a versatile topping with many savoury and sweet applications. She recommends pairing with gamey meats such as bison, duck, and venison, or pork chops. For sweet pairings, she suggests topping bannock or ice cream.