The objective of this applied research project is to conduct airtightness testing on the interpretive centre at Fort Whyte Alive, located in southwest Winnipeg.

The interpretive centre will be undergoing a major envelope upgrade that is projected to take place in 2016.

An article about the pre-renovation testing was published in the Globe and Mail.

Red River College has received funding to continue its applied research activities focused on energy efficiency of large institutional and commercial buildings. A new $1.75-million grant will ensure the continuation of the activities that were started with the Sustainable Infrastructure Technology Research Group (SITRG).
Read more about the BETAC funding →

This objective of this applied research project is to conduct airtightness testing on Ecole Noel Ritchot, located in St. Norbert, Winnipeg.

Ecole Noel Ritchot will be undergoing a major envelope upgrade in 2016. Also, a planned expansion of approximately 30,000 sq.ft. will be added to the school around the same time.

Pre-renovation tests were completed during the summer of 2015.

The research project described in this report was carried out to explore some of the unique problems associated with performing airtightness tests on occupied Multi-Unit Residential Buildings (MURBs).

Current airtightness testing methods and standards are predicated on the assumption that the testing agency has complete control over the building and its operation during the test period.

With unoccupied buildings, this is seldom a problem. However, if the building is an occupied MURB, then major issues arise. Occupant access has to be limited during certain critical portions of the testing, interior doors must be kept open and suite windows have to be kept closed. These last two issues (interior door and suite window positions) were the main focus of this project.

Using two unoccupied and four occupied MURB’s, ranging in size from 8 to 124 units, a series of airtightness tests were conducted to determine if reliable results could be obtained with interior suite doors closed and a limited number of windows partially open. Lawrence Toet, Member of Parliament for Elmwood–Transcona and the Honourable Peter Van Loan, Leader of Government in the House of Commons, and on behalf of Ed Holder, Minister of State (Science and Technology), were at Red River College on July 7, 2015 to highlight a new investment to build a construction research centre that will spark partnerships with Winnipeg’s construction industry.

END_OF_DOCUMENT_TOKEN_TO_BE_REPLACED 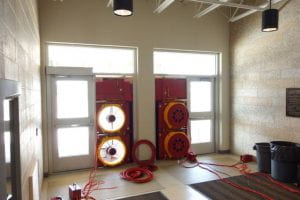 There is a growing recognition of the need to establish performance targets for the airtightness of buildings either through regulations or voluntary programs. Before this occurs, further research is required to establish baseline air leakage rates and appropriate building airtightness targets (and, for specific building types/uses such as schools).

Between 2012 and 2014, with the support of the Natural Sciences and Engineering Research Council and Manitoba Hydro, a total of 26 commercial buildings in Manitoba were tested.

Five of the structures were owned by Manitoba Hydro who also provided financial and in-kind support for the project. The rest were occupied by a variety of private and public owners. An effort was also made to include a few buildings that were undergoing, or had recently completed, a major building envelope retrofit.

Read more about the award

CARSI is a leader in the testing of building construction materials

Few places can compare to Winnipeg for dramatic changes in weather.

Over the course of a typical year, this city’s temperatures will swing from a frigid -30 C in winter to a blazing hot 30 C in summer.

Those wild swings from icy cold to sizzling heat combined with heavy rain and snow loads can take a toll, especially on the materials used in the construction of roads and buildings.

Which brings us to Ray Hoemsen and his colleagues at the Centre for Applied Research in Sustainable Development, also known as CARSI. The centre was conceived as a grass roots idea by the School of Construction and Engineering Technologies at Red River College.

Located on the Notre Dame Campus of Red River College, CARSI is one of places in Canada where builders can test materials for building envelopes – the outer walls of a building – to see how they hold up to the forces of Mother Nature.

To that end, the facility features a huge walk-in environmental testing chamber. Large enough for a car, the chamber has a barn-style door and is divided into two compartments, each of which can be independently controlled. On any given day, Hoemsen and his crew can turn the thermostat in either compartment down to – 40 C or up to 40 C; wall assemblies can be placed in a common wall opening and tested against temperature and humidity differentials.