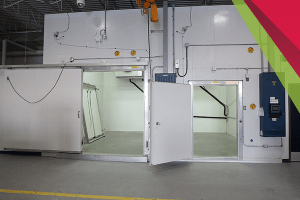 The medium-scale chambers have: 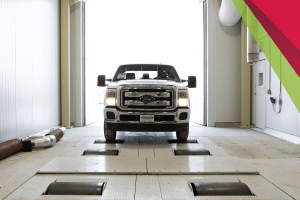 Different types of project applications can be developed in the environmental chambers.

This project explored the use of advanced thermal insulation in a spandrel panel with a limited thickness for insulating space. A mock-up of the panel was tested to evaluate the effect of advanced insulation material on the thermal performance of spandrel panels and limited spaces. An aerogel thermal blanket with an RSI of 5.08 (R-8.75 per inch) was used. The testing provided a valuable set of experimental data that may be used to validate current and future projects.

Comparison of Modelled and Actual Performances

Another project involved a window-to-wall mock-up, which was constructed and placed in the common wall of the environmental chamber. Thermocouples were placed within numerous areas of the test specimen which was subjected to a winter design temperature on one side and a typical residential condition (temperature and relative humidity) on the other. Measurements were made after a thermal steady state was reached, including observations for condensation formation.

Start a Project with BETAC.

Working with us gives you unparalleled access to Red River College Polytechnic’s cutting-edge technology, facilities and expertise. Get in touch with us and propose a new project.

Working with BETAC means you may have access to government funding.