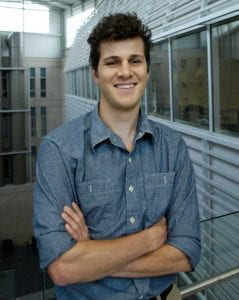 As part of their efforts to make composite manufacturing more economical, an instructor and a grad from RRC’s Mechanical Engineering Technology program have developed a new means of making dissolvable mandrels and patterns, otherwise known as “rapid prototype composite tooling (RPCT).”

Composite manufacturing currently has substantial overhead costs, partly due to the expense of tooling.

“To produce these tools, one typically requires expensive machines that are also very slow and costly to operate,” says Leon Fainstein, the instructor who led the development of the new RPCT. “By contrast, RPCT involves only one affordable machine — a 3D printer.”

The 3D printer will print virtually any shape of dissolvable mandrels and patterns in about four to eight hours, and even print multiple mandrels or patterns at once.

“Manufacturers require permanent composite molds for short production runs. RPCT can make them with dissolvable patterns,” says Serge Broeska (shown, above), the program grad who’s now working as a Research Technologist at RRC’s Centre for Applied Research in Sustainable Infrastructure  (CARSI). “These composite molds can be very complex, have smooth surfaces, and are comparable to metal molds, with the exception that they are much less expensive.”

“With the progressive development of RPCT, the possibilities for composite design and manufacturing are becoming endless,” says Broeska.

To learn more about this breakthrough, read Broeska’s article here. 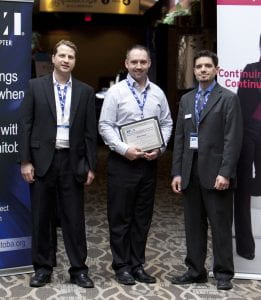 Recent Red River College graduate Blair Fraser has been recognized by the Manitoba arm of the Project Management Institute (PMI), having earned a $1,000 award from the organization at its annual conference last month.

Fraser was acknowledged just months after receiving his certificate in Project Management from RRC’s School of Continuing and Distance Education. The PMI Manitoba award recognizes his outstanding achievement as a student.

“We ask the instructors to think about the graduating class, and nominate the student that they would be most likely to refer to a colleague.  Naturally this nomination is partially based on student grades, however it also recognizes attitude, drive, determination, initiative and teamwork skills,” said Kirk Johnson (shown at left), the College’s Program Manager, Information, Technology and Professional Studies.

For the second year in a row, Red River College served as Title sponsor for the event, which drew upwards of 150 participants — many of them RRC graduates who were attending on behalf of corporate Manitoba. This year, the College was proud to show off its newly-earned PMI Registered Educational Provider (R.E.P.) status — a recognition that lets people know PMI has reviewed RRC’s material and recognizes it to be on par with their high standards of training. At present, R.E.P status is recognized in over 70 countries worldwide.

“Red River College is a massive influence on PMI, because they offer the Project Management accreditation process — where you receive the training required to qualify you to write your certification exam,” explained Yanik Sourisseau (shown, right), chair of communications for PMI Manitoba.

“Not only do those courses give you the tools to become a better project manager, they are recognized internationally as the certification steps toward being qualified to write your exam.” END_OF_DOCUMENT_TOKEN_TO_BE_REPLACED

The Gemini-nominated TV reporter and anchor joined the Sun News team after 12 years with the CBC, where she began her career as an entry-level researcher, and later worked as the local evening news anchor and national parliamentary bureau correspondent.

“If I had to describe (Canada Live), it’s a contrarian take on the news events of the day with unexpected angles and points of view that you might not hear anywhere else,” Erickson recently said of the show.

“Sun News has been an incredible fit, and I feel more at ease and comfortable here than any other professional experience.” 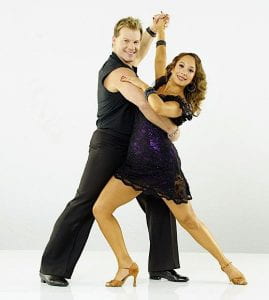 Red River College grad Chris Jericho trades the wrestling ring for the ballroom tonight, as one of the contestants on the latest season of TV’s Dancing with the Stars.

The WWE star, who graduated from RRC’s Creative Communications program in 1990 (before embarking on his successful wrestling career), joins a roster of fellow celebs for the 12th season of the popular dance contest, among them Kirstie Alley, Ralph Macchio, Wendy Williams and Sugar Ray Leonard.

Jericho, who in 2008 received one of RRC’ s inaugural Distinguished Alumni Awards, has plenty of show business experience outside the ring, including a part in the recent Saturday Night Live flick MacGruber and a side career as frontman for the heavy metal band Fozzy. 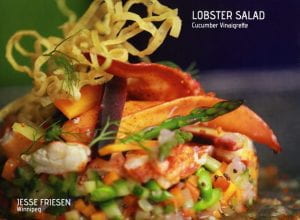 Natasha Dyck and Jesse Friesen — recent Culinary Arts grads working at Tre Visi and Lobby On York, respectively — are both featured in the inaugural edition of the Canadian Culinary Federation’s Made in Canada: A Collection of Recipes from Canada’s Junior Chefs, an 18-month calendar highlighting the accomplishments of junior chefs from coast-to-coast.

Proceeds from the sale of the calendar were originally to go towards the 2011 Bidvest World Cooks Tour Against Hunger in South Africa, as well as the Junior Chefs Initiative in Canada. But Culinary Arts instructor Tim Appleton says his students have decided to instead donate $10 from every $20 calendar sold to World Chefs Without Borders, a humanitarian aid initiative by the World Association of Chefs Societies (WACS).

To order a calendar, contact Tim Appleton at tappleton@rrc.mb.ca.

Having served in a range of engineering and project management capacities for construction firm PCL Constructors Canada Inc. over the last 25 years, Barnes can proudly point out evidence of his handiwork in all corners of the province.

“Being in the industry for as long as I have, I now point out projects around Winnipeg to my children and say, ‘When Daddy was younger, he worked on that project,’” says Barnes, who graduated from RRC’s Constructing Engineering Technology program back in 1991.

“Whenever we visit family in Stonewall, and we pass over the interchange at Highway No. 7 and the perimeter, the kids say, ‘Daddy is this your bridge?’ And I can say yes.”

The list of projects that Barnes has played a part in since signing on with PCL — the largest general contractor in Canada as well as in Manitoba, and the seventh-largest contracting firm in North America — is pretty staggering, indeed. When he started with the company in 1985, he was involved with the terminal expansion at the Winnipeg International Airport. In the years since, he’s personally managed over $1.6 billion worth of projects, including civil work for the province, Manitoba Hydro and the mining industry in northern Manitoba.  He has also worked on remote, winter road and air accessible projects in First Nations communities, as well as commercial and institutional projects in Winnipeg and other parts of the province. END_OF_DOCUMENT_TOKEN_TO_BE_REPLACED

As a teenager, Red River College alum Alex Zimmerman devoted the bulk of his free time — and a sizeable amount of cash — to his passion for rebuilding cars.

A few short years later, he switched to a far more environmentally-friendly obsession, and has spent the ensuing decades at the forefront of the green buildings movement in Canada.

Not surprisingly, Zimmerman is also a committed environmentalist in his day-to-day life, as well. He’s hasn’t driven his car to work since 1977 — preferring instead to bike — and he cites his concern for the future of the planet as one of the key factors fuelling his passion for green technologies.

“It (green technology) impacts climate change, which is the single biggest crisis facing the human race in the last 10,000 years,” says Zimmerman, who after years of managing environmental stewardship initiatives in B.C. and Alberta, recently went into business for himself as President of Applied Green Consulting Ltd.  “It takes a long time to turn around, but it’s incredibly important — what you can do and how you can react, environmentally.”

Zimmerman graduated from RRC’s Engineering Technology program in 1975 — a period when the only “green” development to catch the engineering world’s attention was the introduction of solar power. After a brief stint working for the Navy, he took a job with Alberta Public Works, Supply & Services (APWSS), where he’d spend the next 14 years exploring how to make new and existing buildings more energy-efficient, often with the help of emerging technologies like computer modeling and motorized building controls.

“I remember being shocked to learn at the time that we didn’t insulate to save energy; we insulated to save money,” says Zimmerman. “That seemed counterintuitive and just plain wrong to me — I thought energy had an intrinsic value beyond just the monetary, and that we should have been treating it better than we were.” END_OF_DOCUMENT_TOKEN_TO_BE_REPLACED

It isn’t too often that you hear of parents trying to convince their kids not to go to medical school.

Garriock, who now runs the family business along with his younger brother, Wade, was actually considering becoming a doctor until his father took him aside for a little heart-to-heart.

“My dad sat me down one day and said, ‘Look — you’re going to be in school for the next six or seven years if you want to be a doctor, and when you’re done, you’re going to have some pretty serious student loans,’” Garriock recalls.

“He said, “Why don’t you go to Red River College and take their Business Administration course, and if you work hard enough — and if I think you’re ready, and you’re the right guy — then you can buy the business from me?’” END_OF_DOCUMENT_TOKEN_TO_BE_REPLACED

Global National News anchor Dawna Friesen has come a long way since her days as a Red River College student.

In fact, Friesen’s distinguished career as a television journalist has taken her all over the world — from rural Manitoba to a foreign correspondent’s gig in the U.K., to her current position, which finds her delivering the news to hundreds of thousands of Canadian households each evening.

“It’s Red River College that launched me on the road to where I am today,” says Friesen, who in 2009 was named one of RRC’s Distinguished Alumni.

“The same basic principles I learned at school … are still the same basic story-telling skills I use today: getting the facts right, double-sourcing, diligence, patience, and of course having a few laughs along the way.”

Friesen graduated from RRC’s Creative Communications program in 1984, and began her journalism career working in Brandon, Saskatoon, Thunder Bay and Winnipeg. She’s been interested in journalism ever since she was a young girl growing up on a farm outside Winnipeg.

“My parents always used to read the newspaper and watch CBC News, and the radio was always on in the background in the kitchen — either on CJOB or CBC — so I was exposed to news at a very young age,” says Friesen, who is also an executive editor of Global National.

“I was interested in current events, and in the world, and I realized I wanted to tell stories. Plus I always wanted to travel, so journalism seemed a kind of natural fit.” END_OF_DOCUMENT_TOKEN_TO_BE_REPLACED