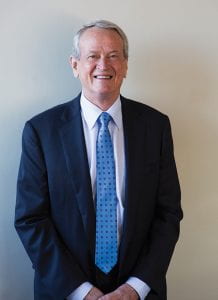 He’s a titan of industry, a paragon of philanthropy and a proud Red River College alum.

And for Paul Charette, recipient of RRC’s 2017 Honorary Degree, his most recent recognition comes exactly 50 years after he first graduated from the College.

The former CEO of Bird Construction, Charette graduated from RRC’s Civil Technology program back in 1967 (after receiving a $200 bursary from the Women’s Auxiliary of West Kildonan).

He added to his credentials with a Computer Programming degree in 1968, then worked for nine years with Manitoba Hydro on the development of the Nelson River and Manitoba Rolling Mills expansion projects.

In 1976, Charette began working for Bird Construction — first as a project coordinator, then as chief operating officer (1988), chief executive office (1991), and chair of the board (2001). During that time, he led the company through a period of substantial growth, increasing revenues from $90 million in 1988 to more than $1 billion in 2008, when he stepped down as CEO.

The Charettes are RRC’s most prominent individual donors, having over the years established two award endowments — which fund 12 student awards each year — and the Paul and Gerri Charette Manitoba Applied Research Chair in Sustainable Construction.

He also played a pivotal role in helping to establish the Construction Management Degree program at RRC.

In 2010, he was named the Canadian Construction Association’s Person of the Year, and this year was named Colleges and Institutes Canada’s 2017 Outstanding Partner, an award that celebrates the close collaboration between colleges, institutes and their industry partners.