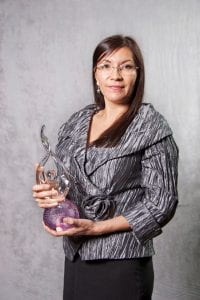 Red River College awards a Red River College Honorary Diploma to an individual who demonstrates high standards of excellence in their personal and professional achievements, and whose involvement in the community is widely recognized.

Lisa Meeches is one of the most dynamic and respected producers in the film industry, who happens to be an Ojibway from Long Plain First Nation. One of her recent projects, four-time CSA nominee and two-time winner We Were Children, is widely praised by residential school survivors for its power to heal, while general audiences have been moved by this truth of Canada’s colonial past.

She also devotes considerable time to other causes. Since its inception eight years ago, Meeches has been critical to the success of the Manito Ahbee Festival, where she has acted in the capacity of board chair on a volunteer basis until recently stepping down to assume the role of executive director. She also sits on the national board of the Heart and Stroke Foundation.

Meeches has been the recipient of many local, regional and national awards for her exemplary contributions in culture, media and entrepreneurship. Among her many accolades, she is a past recipient of a National Aboriginal Achievement Award.

True to her heritage, Meeches practices the customs of her faith and is a renowned champion fancy shawl dancer.