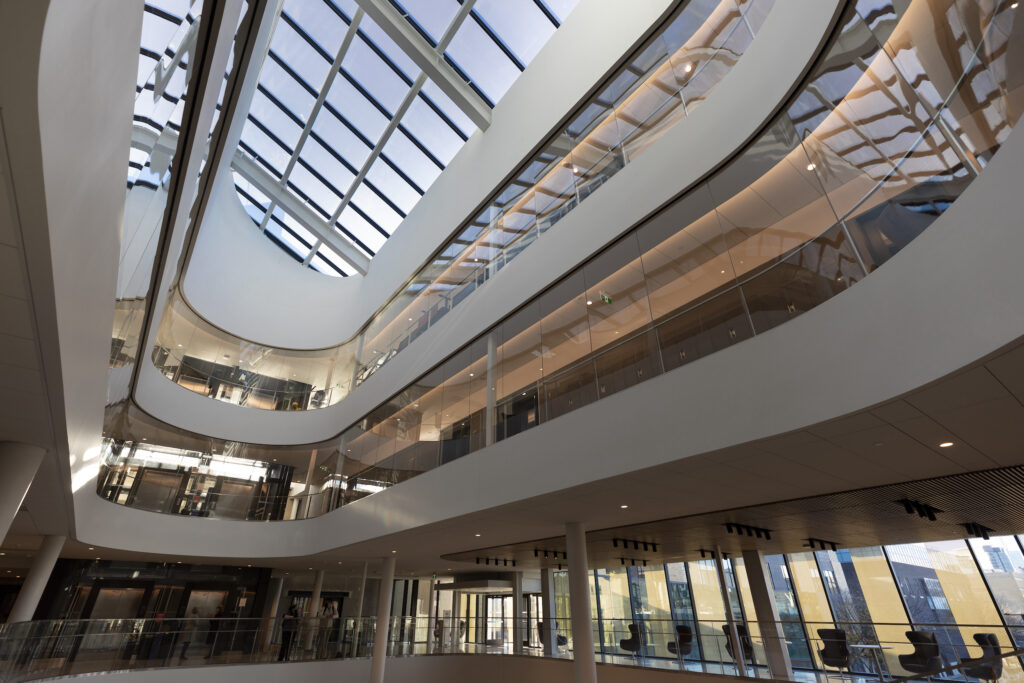 Formerly known as the Innovation Centre project, the new building — now called Manitou a bi Bii daziigae, which translates to “Where Creator sits / Brings light” — officially opened its doors to the public.

As part of the festivities, the College’s Elders-in-Residence — Elder Paul Guimond, Okonace (Little Eagle Bone) from Sagkeeng First Nation, and Miss Una Swan, Black Eagle Woman, from Fisher River Cree Nation — held a pipe ceremony in the agora of the new 100,000 square-foot space to introduce the name to the community, bring spirit and life to the name, and honour traditional sacred ceremony.

“We’re in a time of beautiful change to bring that light, that hope, and I think if we can bring the spirit of that name into that building, maybe we’ll be able to take that step ahead and walk with it,” said Guimond. “The new building is so unique. It’s powered by nature. Much like how we live, powered by nature and the sun. The sun is such a beautiful spirit: it brings warmth, it brings growth, it brings light, it brings hope. Without that sun there is no life. And if you look at the new building, it’s all powered by the sun.

Indigenous knowledge, teachings and traditions were prioritized in the design and creation of the building to ensure Indigenous students, staff and community were represented through art — by Anishinabee artist Jackie Traverse and Cree/British artist KC Adams, and more — functionality for ceremony with ventilated spaces (including the 210-seat Roundhouse Auditorium), and the intention for inclusive spaces to connect and collaborate. 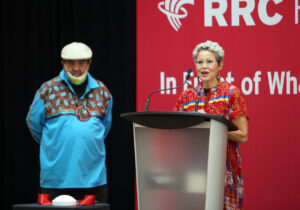 “To me, it means it’s a place where the spirit lives, where there’s light, where it’s progressive, forward-thinking. You walk into the building and you feel the energy there,” said Swan. “It’s so positive and it represents new beginnings and forward-thinking ideas that were not thought of before.

“Everything Indigenous people would have wanted done for this building has been done. All the material that could have been used from the old building was reused. It’s run by the sun. It epitomizes the Indigenous community here in Manitoba. So we’re very excited and proud about this building. You walk in there, you know it’s an Indigenous building.”

“I thought that it represented transparency, because there’s so many windows in the building where you can see other areas, it’s wide open, there’s four levels, which speaks to me because of the four directions, and then they have two rooms that are round and ventilated so that we can invite people to have ceremonies or have drum practice and things like that. So we really want to enjoy it, invite the community into the building and make it a community place.”

As part of the consultation process, the Elders were approached and offered tobacco to begin a traditional naming process for the new building, which will serve as a hub for technology, collaboration and connection. Both toured the building beforehand, and used their own traditional ceremonial protocols as instructed by their teachings, given to them by their Elders and Spiritual Guides.

“The new name … represents a new beginning and reflects the space and history where the building stands,” said RRC President Fred Meier. “Having this name that has so much depth and meaning really grounds us in the pursuit of the building’s mission to spark transformation, ingenuity and collaboration between students and industry.

“This name honours the heritage of where we live, represents the work and learning that will occur inside, and serves as a powerful inspiration to continue in our commitment to embedding truth and reconciliation in everything we do. The building will house some of our most transformative and cutting-edge Indigenous Education programs, and we hope that the many layers of this building — from the artwork, to inclusive spaces, to the name — contribute to Indigenous student and community inclusion and success, and empower them on their education journey. Working alongside our Elders during this process has been so wonderful and encompasses what we intend with Manitou a bi Bii daziigae.” 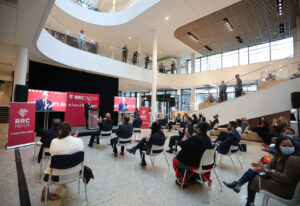 The building project was announced in 2017 with a $40.6-million commitment of support from the federal government — through the Post-Secondary Institutions Strategic Investment Fund (PSI-SIF) — and a provincial loan of up to $54.8 million. By bringing more than 1,200 additional staff and students to the building each day, the space will help the College create jobs, expand research opportunities to work with Indigenous entrepreneurs, and foster pathways for education and careers for Indigenous learners.

“Our government is proud to support Manitou a bi Bii daziigae and the many opportunities it will create, including new academic options for First Nation, Inuit and Métis students across the province, and access to the technology and innovation that a polytechnic has to offer,” said Hon. Dan Vandal, Minister of Northern Affairs and the minister responsible for Prairie Economic Development Canada and the Canadian Northern Economic Development Agency.

“Partnerships with entrepreneurs and businesses will provide new avenues to explore, while promoting economic growth and continued revitalization and expansion to the heart of Winnipeg. This name, that pays respect to Indigenous languages and heritage, combined with the intent and purpose of this new building, will be a beacon of inspiration of our shared journey of reconciliation.”

The programs that will be delivered within the space align with RRC Polytech’s commitment to the province’s Skills, Talent and Knowledge strategy.

“The Province of Manitoba is honoured to be a part of this momentous occasion, and to partner with RRC Polytech in the opening of Manitou a bi Bii daziigae,” said Hon. Wayne Ewasko, provincial Minister of Advanced Education, Skills and Immigration.

“Full participation of Indigenous people in Manitoba’s economy is critical to improving quality of life and to building a stronger social and economic fabric in our province. The intention for RRC Polytech to collaborate with Indigenous communities, entrepreneurs and students within this space is essential.” 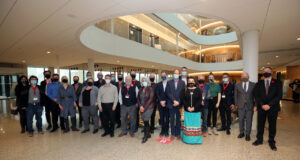 “The opening of RRC Polytech’s Manitou a bi Bii daziigae is a significant milestone for our city’s downtown,” added Mayor Brian Bowman. “Winnipeg was recently named the World’s Most Intelligent Community thanks to the efforts of important stakeholders like RRC Polytech. Part of this global recognition was because of our city’s commitment to innovation and reconciliation. As a partner to Winnipeg’s Indigenous Accord, RRC Polytech is continuing to take meaningful action on our community’s journey of reconciliation.”

Certain spaces in and around the new building have been generously supported by the Red River College Students’ Association, Wawanesa Mutual Insurance, TD Friends of the Environment Foundation, Informanix Technology Group and the Children’s Education Funds. RRC Polytech is proud to work with its donor community to enhance its learning spaces and create more opportunities for its students.