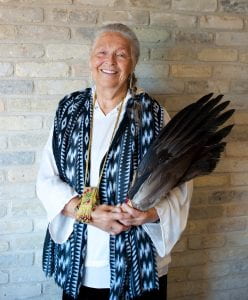 Elder Mae Louise Campbell is a healer, teacher, grandmother and advocate who has made it her life’s work to support and strengthen Indigenous women — both individually and collectively.

Today, Red River College is proud to recognize her contributions to the community by awarding her an Honorary Diploma in Indigenous Social Enterprise, with a focus on Community Development and Social Innovation.

“In an organization as large as Red River College, it’s special to find someone who is known, respected and beloved by an entire community, and Elder Mae Louise is all of those things,” said RRC President Fred Meier.

“During her 14 years with the College, she was invited by all 110 academic program areas to conduct and lead countless workshops, ceremonies and teachings. She is known and celebrated for her stories that underscore the importance of harmony, respect and resilience.

“Elder Mae Louise’s leadership has left an indelible mark on the College and the province of Manitoba, and we are pleased to award her this honorary diploma and recognize her important contributions.”

Cambpell’s knowledge and experience have been embraced by many. Her life lessons and unique ability to educate and share knowledge around Indigenous worldviews — creating dialogue outside of textbooks — has been imperative to both Indigenous and non-Indigenous members of the community.

She has been an instrumental figure supporting many initiatives and committees, both nationally and across Manitoba, including: Grandmother Moon Lodge, Clan Mothers Healing Village and Knowledge Centre, the Mayor’s Indigenous Advisory Circle, the Grandmothers Council of Manitoba (as a Wisdom Keeper), and the First Nations Advisory Committee to Canada’s Prenatal Nutritional Program. She served as an Elder and advisor for the Canadian Women’s Foundation on matters concerning the sexual exploitation and human trafficking of women and girls, and was the recipient of the 2016 Indspire Award in the category of Culture, Heritage and Spirituality.

The College announced and presented Campbell’s Honorary Diploma yesterday at the first ever Virtual Fall Convocation ceremony, during which more than 900 graduates from every RRC campus celebrated the milestone achievement.

“I am very humbled to receive this gift presented to me by Red River College. My time at the College has been exciting and I am proud of the way we have moved ahead to advance Indigenous education, and stressed the importance of having Elders on board and part of the College community,” Campbell said of the honour.

“I often think about those of us who are instructors, teachers and knowledge sharers, and I think it’s so important for us to learn from one another and from our students — this is how we gain wisdom. I respect and honour Red River College’s commitment to further Indigenize the College, and I encourage all of us educators to continue to keep our minds open to new ways of learning, especially in these challenging times.”