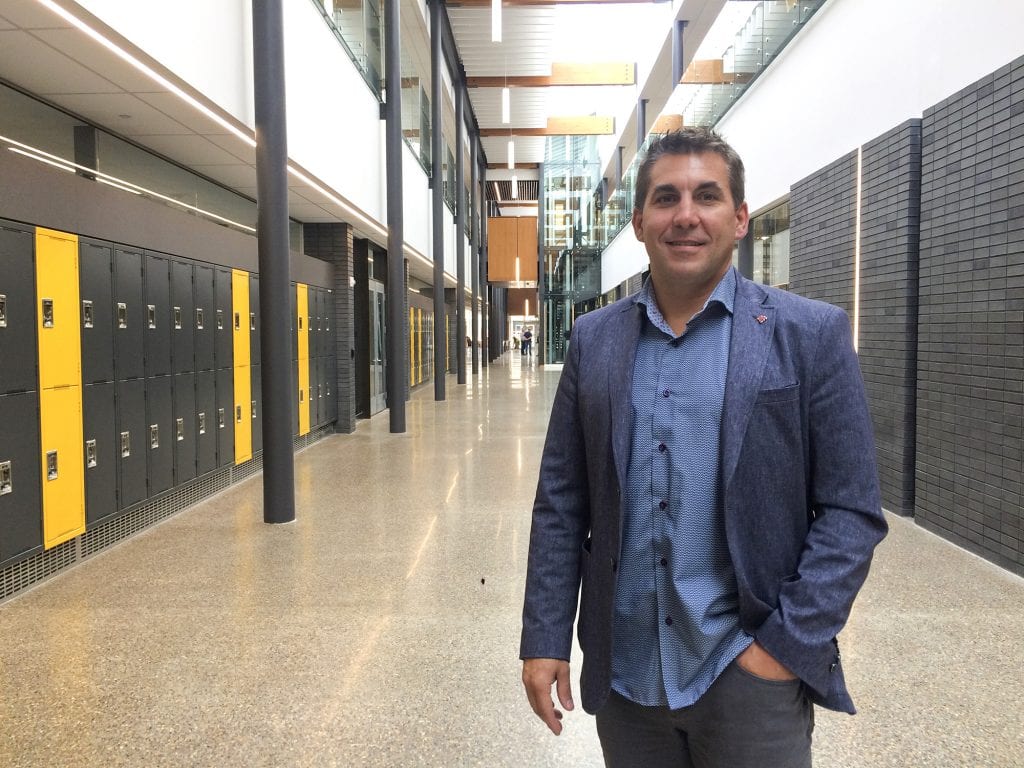 Red River College and the province of Manitoba are leading the way in online apprenticeship trades training during the Covid-19 pandemic.

When the College was faced with a mandated campus closure in mid-March, students were given a study week while instructors and staff worked to decide on the best ways to administer the remainder of their program and course materials.

“People were confused, anxious and a little bit reluctant in a way, but it quickly shifted — moving to a can-do attitude, where they realized the seriousness of this crisis and the economy,” says Derek Kochenash (shown above), Dean of Skilled Trades and Technologies at RRC.

“It’s incredibly inspiring to see people have their world disrupted to this extent, and then come together to teach each other new technologies, and to provide advice and support.”

Over the last eight years, RRC has implemented a number of Apprenticeship Manitoba-funded projects aimed at moving its trades training and resources online, in an effort to create accessible options for students while ensuring consistency in delivery.

Through these projects, RRC’s Carpentry department uploaded all its materials and resources to LEARN. The College was in the process of doing the same for Plumbing and Electrical when the pandemic hit Manitoba last month.

Thanks to the early start, staff and instructors were able to train each other on LEARN software, help colleagues move their course content online, and provide assistance with video conferencing for virtual classroom setups. One week after the study break, all programs and courses were able to resume.

“We’re really one of only a couple of provinces that is pushing through and trying to make this work,” says Dave McCutcheon, executive director of Apprenticeship Manitoba. “The advantage in having online resources in this situation is that it’s allowing students to progress, and to do what is being asked of them — to stay home, stay out of the public, and even to stay at home when their kids may be off school.”

McCutcheon says the overall intent for these projects isn’t to move trades training to an online-only environment, but to allow apprenticeship students access to additional review materials, and to ensure they’re eventually all learning from the same materials at each level.

“It’s a way of getting consistent information to apprentices learning the same subject matter,” he says, noting that by building its resources to match the nationally harmonized curriculum, the College also allows for greater mobility.

“So ideally, if (apprentices) were trained in Alberta, they can move to Manitoba and pick up their training where they left off.”

Tyler Steiner and Kevan Gabler are educational technologists who, in consultation with the Centre for Learning and Program Excellence, helped move the Carpentry department’s material online over the last five years.

“When I first started, every instructor had their own set of notes and their own tests — there was no continuity,” says Gabler. “By putting everything on LEARN, we now have standardized content and testing. Instructors are the key to delivering the content, and they can add their own spin and way of teaching — but every student is receiving the same training and information.”

The pair take turns embedding themselves in the departments they’re working with, sharing office space with instructors and making themselves available for classroom technology support, a strategy that helps them determine the best way to provide that content online.

In some classes, Steiner would record instructors teaching lessons while drawing diagrams or making notes on a white board, which Gabler later edited to include subtitles and a clear view of the board’s information.

“You could be going over the information and there might be one student in the back who is having a bad day and doesn’t want to raise their hand if they’re not fully getting it or can’t concentrate,” says Gabler. “That student could go online anytime, anywhere and watch the video so they can understand the information they missed.”

Because 30-40% of apprenticeship training is typically comprised of hands-on work in a lab or shop setting, RRC is working with Apprenticeship Manitoba on solutions for helping students complete their requirements at each level. Possibilities could include a later hands-on component or on-the-job evaluations.

The groups have met virtually with representatives from Assiniboine Community College, Manitoba Institute of Trades and Technology and University College of the North to share resources and information about how best to move forward with training during this time of uncertainty.

Kochenash says he’s very proud of the work his team has done to adapt, and to continue meeting the needs of their apprentices.

“These are subject-matter experts who spent significant parts of their careers on job sites, with tools and on projects. They’re now embracing the change, quickly learning and adapting because they want to give back to the students they’re teaching,” he says. “We’re not focusing on perfect, we’re not focusing on amazing — we have pockets of amazing, but we’re focusing on getting it done.”

RRC Polytech · 12 hours ago
@RRC
Students with an interest in sales, banking and client success are invited to join Scotiabank for a virtual event to learn about the Client Solutions Advisor position. Register for the event here: https://t.co/xGMCWJELsI
View on Twitter
0
2
RRC Polytech · 17 hours ago
@RRC
Join our talented team! New opportunities just posted include: