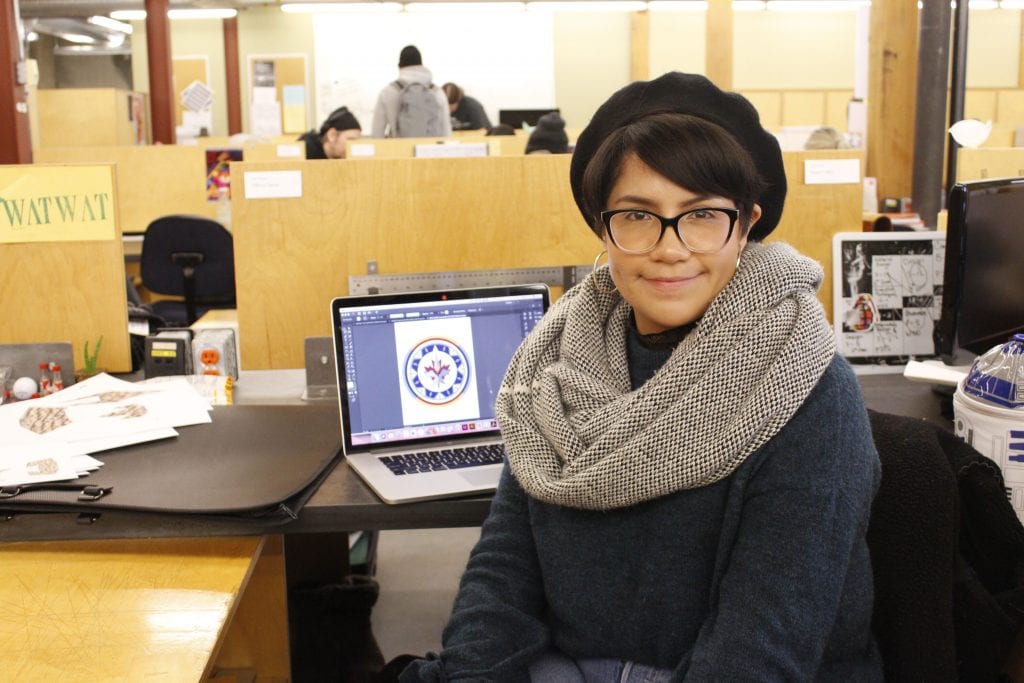 Leticia Spence says she’s disappointed when designers resort to using general symbols or motifs, like a feather or a circle with four points, to represent Indigenous cultures.

Which is why Spence, a Graphic Design student at Red River College, wanted to take a more authentic approach when collaborating with True North Sports + Entertainment (TNSE) on versions of the Winnipeg Jets and Manitoba Moose logos to celebrate Indigenous culture.

She made a point of doing research, reviewing artifacts, learning from modern Indigenous artists and asking members of her own family and community, Pimicikamak First Nation, for help when she started the design process. 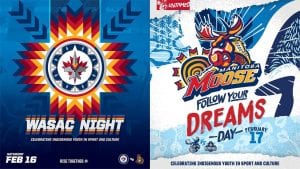 “Each tribe has a visual language to express their views of the world,” says Spence. “I wanted to show that we’re united by including motifs, symbols and patterns from many different Indigenous cultures and tribes in the logos.”

“Through Leticia’s expertise we gained a much better understanding of how nuanced Indigenous art is, and how we can use it to celebrate Indigenous communities and engage with them,” says Dudych.

Spence came up with the concepts and designed the initial drafts, then worked with TNSE’s design team in their offices to complete the project.

“The majority of their team are RRC grads, so it was nice to be able to get advice for my future going forward,” she says.

Spence will soon finish her second year of the Graphic Design program, and says her instructors have imparted a lot of beneficial knowledge that she’s applied in her designs, and will take with her into the industry. She says the program demands determination and imposes structure, which is something she didn’t experience before coming to RRC.

“It’s built a lot of personal character and made me a stronger artist and graphic designer,” says Spence. “If I can get through this, then there’s nothing that can hold me back from achieving what I want.”

Kevin Chief, former Executive Director of WASAC and current board member of the True North Youth Foundation, says “it’s irresponsible to ask youth to overcome hardship and challenges without showing them another way.”

Chief says Spence is a role model and ambassador and is showing Indigenous youth what is possible when you work hard and have a willingness to learn.

“Feeling proud is about your ability to give back in a way that’s most meaningful to you. There’s no better example than Leticia using her talents for something like this.”

When he first saw the logos, Chief says his initial reaction was amazement and pride.

“I felt proud of being Indigenous, proud of the mentorship and support from RRC, proud of the partnership between Leticia and the team at TNSE, and proud to be able to showcase her work on this scale.”

Spence included elements of her Cree heritage in the logos, and says the project gave her a chance to use her skills to contribute something to her community, which is important to her. She’s worked with WASAC in the past, and has a long-term goal to engage Indigenous youth from remote communities in creative pursuits.

“I would have loved more opportunities to be creative growing up,” she says.

Fans can purchase T-shirts with each logo at both games on Feb. 16 and 17, with proceeds going to WASAC.

RRC Polytech · 5 hours ago
@RRC
Begin your career in Residential Decorating. This full-time, four-month certificate program is offered in person at the Notre Dame Campus in Winnipeg. Also offered on a part-time basis.