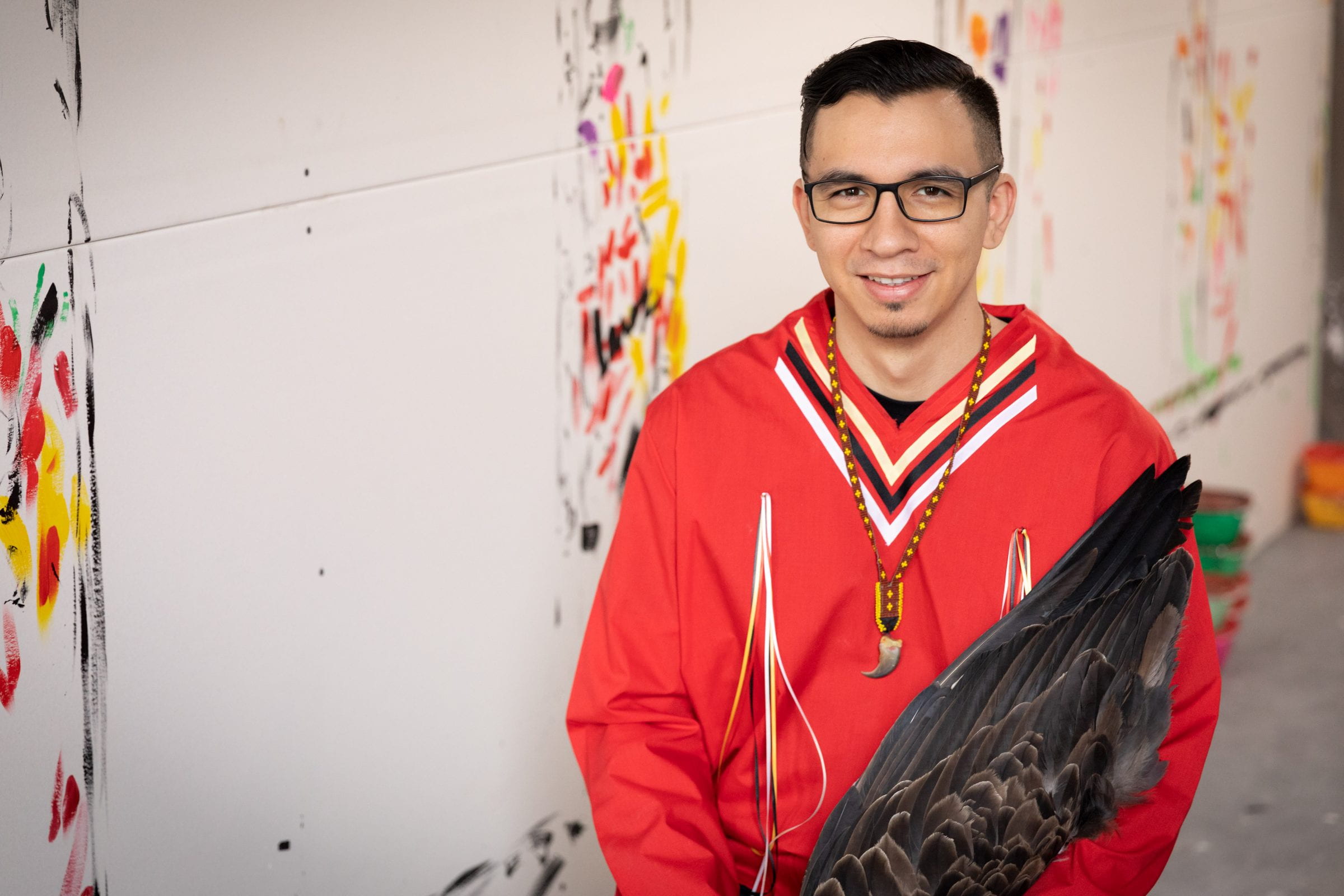 Large-scale murals in his colourful, pop art style grace the walls of The Forks Market, FortWhyte Alive, and Winnipeg’s North End. He has designed logos for Festival Du Voyageur, held exhibitions at aceart inc and Graffiti Art Gallery, painted the Niakwa Trail Bridge, and hosted half a dozen workshops throughout the city.

As an artist, Stranger has played a large role in creating accessible public art and showcasing culture in Winnipeg. And to him, it’s purely a community act.

“Public art is extremely important. To have that colour, culture, and vibrancy when you walk down your street, it makes your day. Once I’m done a mural piece, it’s not mine anymore. It’s for the people, for whoever needs to see it. It’s expression. We need to be able to share our deepest feelings and truest emotions through art, words, audio, music, and voice. That’s why art is so valuable, because it allows us to connect as people.”

Art has always been a part of Stranger’s life. His father, Wayne Stranger, is an accomplished bronze sculptor and studied fine art at the University of Manitoba. He remembers his grandparents, uncles, and aunts all with creative endeavours of their own.

“I was exposed to art a lot,” said Stranger. “I was always drawing and sketching my favourite Dragon Ball Z characters, Pokémon, and cars from photo books. I was also always building things—I love using my hands to make stuff. That comes from my dad.”

In high school, Stranger took an interest in apparel design and screen-printing courses, but it wasn’t until he attended Red River College’s graphic design program in 2010 that he was first exposed to the industry.

The program’s learning curve was steep, said Stranger, especially when it came to technology. He had never used a MacBook before attending the program (in fact, on the first day, he wasn’t entirely sure how to turn it on). Alongside the training in technology, techniques and philosophy of graphic design, Stranger found the program’s supplementary lessons on marketing, public speaking, and exposure to the interview process incredibly useful.

“You have to be able to take constructive criticism and direction, and put it into practice. The students weren’t just thrown into the street like, See you later, good luck. The instructor’s job is to show you your potential and help unlock it, and they showed me as much as they could within two years. At the end of it, you’re left with a lot of information that carries on. All those teachings are still in my work. I benefitted immensely from everything they showed me.”

Stranger points to one class in particular with having a lasting impact on his artistic career: an illustration course with instructor Randy Butterfield.

“[That class] is where I honed my skill and found my niche for drawing and illustrating. That carried on after college into my professional art career,” Stranger said.

“Without that illustrating course and my instructors, I wouldn’t have pursued it. They pushed my boundaries and got me out of my comfort zone.”

Stranger’s path from the halls of the college to the walls of the city developed organically. He spent nine years working as a graphic designer for an advertising company before branching out full-time as a self-employed visual artist and graphic designer earlier this year.

One of Stranger’s most cherished mural projects is Change, located at Sutherland Avenue and Main Street and created in collaboration with Synonym Art Consultation for Wall-to-Wall Mural & Culture Festival. When he moved to Winnipeg from Peguis First Nation in 2000, Stranger lived in Point Douglas, so creating a mural for the neighbourhood was a huge honour for the young artist. The project itself wasn’t all smooth sailing, however.

“There was snow. There were delays. But we powered through—freezing, hands shaking, and hungry. Someone got sick from the cold. But it ended with the Sakihiwe Festival on the street with live music, powwow dancers, break-dancers, and a feast.”

Today, Stranger is in the midst of creating the largest mural he’s ever worked on—12 feet tall, 160 feet long—and the process is one in which he feels he still has much to learn.

“Telling stories, using language, using colour, and the technique of making the murals themselves—I’m learning all the time. There is so much potential and the human mind is so untapped,” Stranger said. “You have to be the one to open it, to let it out and decipher how to be creative in different ways. And to accept the fact that you’re not good at everything, you don’t have to be perfect. That’s my message to everyone—try your best. That’s all people can expect.”

When it comes to advice for future Red River College students, Stranger has plenty.

“Don’t forget why you’re there. You’re there to learn, to be a graphic designer, and to be an artist. That takes a full commitment of yourself—of mind, body, and soul. You have to earn that role and that’s why you go to school.

Remind yourself why you chose that path and surround yourself with positive people and connect with people in the program. Network. Talk to your instructors and have a coffee with them if you can. Reach out and talk to other professionals. Practice patience. Be accepting to new ideas and limit yourself from distractions if you can. Try to find the fun in the work, and accept the fact that this is what you want to be doing for the next 30 years.”