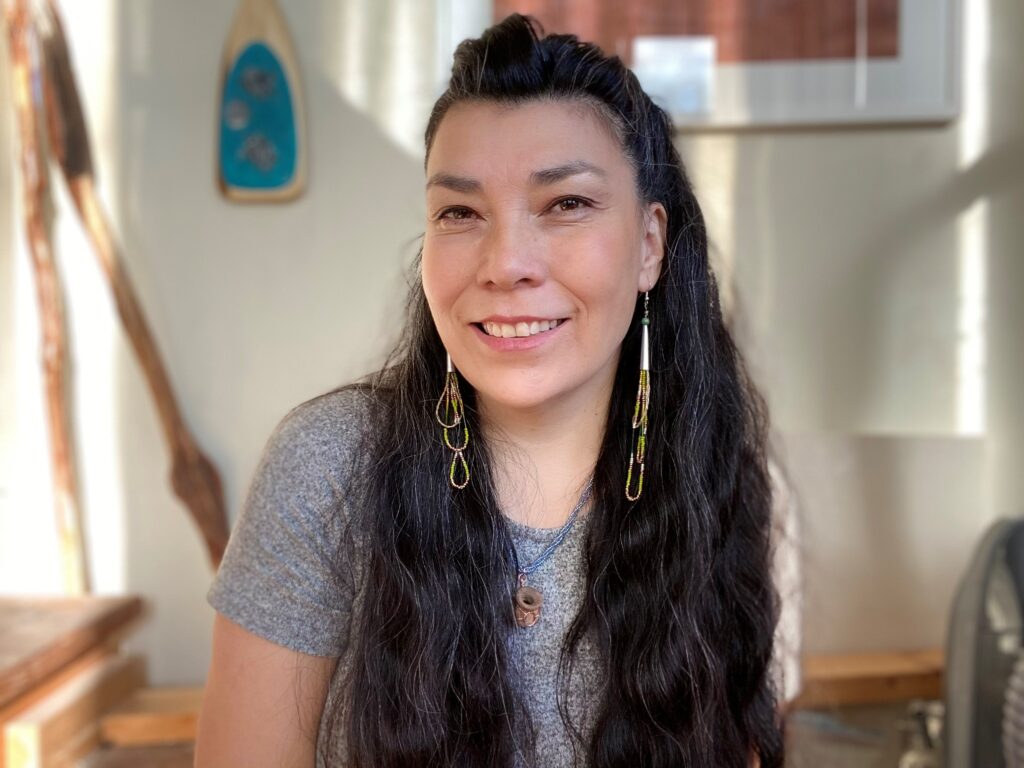 A stunning work of art embedded in the floor of the Roundhouse Auditorium at RRC Polytech’s new Manitou a bi Bii daziigae space honours Indigenous artistry and technology while highlighting its importance to our past, present and future.

Designed by prominent Anishinaabe/Nêhiyaw/British artist KC Adams, Morning Star incorporates traditional and emerging technologies in a space designed to bring people from a wide range of backgrounds together to learn and innovate. Manitou a bi Bii daziigae is home to RRC Polytech’s flagship business, information and technology programs.

“Embracing technology is a part of who Indigenous people are and have always been,” she explains.

“Birch bark was used as a versatile technology for many tribal groups across North America for knowledge sharing, vessels, shelter, transportation, design, fuel and even sunglasses to prevent snow-blindness.”

Adams, who is based in Winnipeg, sourced the bark herself, then scanned and digitally altered it to fit the larger design. The bark is arranged in a pattern that represents new beginnings —  “the first star you see in the morning, the star that guides us.” 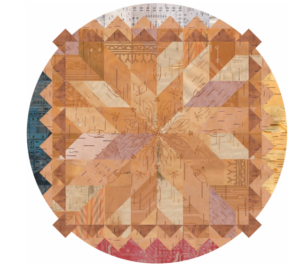 Morning Star also recognizes each of the Indigenous groups in Treaty One Territory — where RRC Polytech’s Winnipeg campuses are located — along with “all their givings, influences and contributions to technology throughout the history of this land.”

For instance, the morning star pattern frequently appears in star blankets, and comes from the Nakota, Lakota and Dakota nations. In Adams’ work, it overlaps with a medicine wheel motif inspired by Cree tradition, with four colours pointing in four directions.

The work also features symmetrical markings similar to Cree and Ojibway birch bark biting, a traditional artform in which artists “take a piece of birch bark, fold it and bite it, then open it up and get this design,” Adams explains. Elements of the piece were inspired by the work of Ilona Stanley, whose birch bark art features dragonflies, butterflies and floral designs.

Morning Star’s colour palette honours the vivid shades Indigenous peoples use to decorate their clothing and sacred items. Other symbols in its design include triangles, which were used by all cultural groups living in the area, and snakes that evoke Ojibway water serpent stories. A sash represents the Métis nation, and a prominent “Y” pattern evokes Inuit wrist tattoos.

“The Inuit tattoos you’d see on women’s arms and wrists, they’re like a circuit board inked on. In this piece, they represent new technology and thinking about future technologies.”

Adams says she has a strong relationship with Treaty One Territory because of her family history.

“I am a descendant of surveyor and explorer Peter Fidler (Derbyshire, England) and Mary Mackegonne (York Factory). My sixth great-grandfather, George Taylor, surveyed the Red River Colony and created the first map of Winnipeg in 1836. I am also linked to these lands and waters through blood memory passed on from my Indigenous ancestors.”

She turned to learning about her ancestors’ artistic traditions to understand her history, and discovered that created objects contain power and knowledge, including traditions, spiritual beliefs and natural sciences. While Adams was designing, she thought about the space as a place where Elders, children and others would explore details in the work, and discover a direct connection to its themes and meanings.

Passing on this knowledge to the future is important to her, she says, because, “I grew up without pride, in large part because residential schools and the Indian Act actively destroyed my connection to my culture.”

No stranger to large-scale art projects, Adams is the co-creator (with Val Vint and Jaimie Isaac) of the 30-foot Niimaamaa sculpture at The Forks. She hopes Morning Star will remind Indigenous learners and visitors to feel pride in their culture, strength and resilience. She also wants them to recognize that Indigenous people aren’t just part of the past — they’re part of the present and the future.

“We [Indigenous people] often incorporate the future as part of our reality, thinking seven generations ahead. How we move and how we navigate now affects the future,” she says.

“We’re doing something Antex Western has never done before — this really elaborate piece that allows people to come together and celebrate Indigenous culture.”

The Roundhouse Auditorium where the Morning Star is located sits in the heart of Manitou a bi Bii daziigae, on the second floor. It serves as a versatile 210-seat space for interactive lectures, 360-degree presentations, immersive conversations, traditional teachings, ceremonies and large events such as the annual Pow Wow, which honours Indigenous student achievement.

Manitou a bi Bii daziigae is in downtown Winnipeg, home to the highest urban population of Indigenous people in Canada. Through this new building, RRC Polytech intends to provide new opportunities for community groups, organizations and entrepreneurs to collaborate on projects. In addition to Adams’ work, the building features prominent art from Anishinaabe artist Jackie Traverse.

“As one of the three commitments of our new five-year strategic plan, this renewed dedication to Truth and Reconciliation is a crucial step forward in advancing Indigenous education in Manitoba. We begin that work by listening, acknowledging the past, and creating opportunities for Indigenous people to take the lead in shaping our future.”

RRC Polytech and KC Adams will unveil Morning Star next month, during the official opening of the Roundhouse Auditorium.

Students welcomed back to campus with week’s worth of activities, events