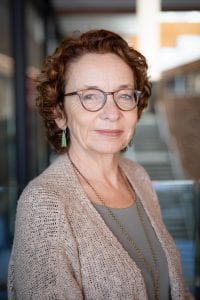 A Red River College research chair has been named a member of the Order of Canada, in recognition of her lifelong commitment to the health and well-being of young children.

Jan Sanderson, a research chair with the College’s School of Health Sciences and Community Services, was among 120 new companions, officers and members of the order announced by the Governor General in December.

Sanderson was recognized “for her leadership within Manitoba’s pubic service by promoting improved quality of life and health for children.” She was one of only three Manitobans to receive the designation, along with physician and researcher Cheryl Rockman-Greenberg and TV and film producer Louis-Frederic Paquin.

Sanderson says she grateful to those who nominated her for the honour, but noted the irony of being singled out for work in the field of early child development, where “every success depends on partnerships and collaboration.”

“I have been incredibly lucky to have had the opportunity to work with amazing, committed people across multiple sectors — government, non-profit, academia, health and education — to support children and their families,” she says.

“And now the opportunity with the research team at RRC seems like the icing on the cake. The work that is done by this quiet but mighty team is impacting on children’s well-being locally, nationally and around the world.”

Born and raised in Winnipeg, Sanderson spent the first 10 years of her career working in government roles in Saskatchewan, before returning to Manitoba in 1989 and spending nearly three decades working for the province on a range of portfolios, including human resources, labour relations and program management.

She became the CEO of Healthy Child Manitoba in 2001, and in 2009 merged those responsibilities with her new role as deputy minister of Healthy Living, Youth and Seniors. In 2012, while retaining her CEO role, she was appointed deputy minister of the newly created Department of Children and Youth Opportunities.

Sanderson became a research chair at RRC in 2016, and has spent the ensuing years championing one of the College’s most globally renowned resources, the Science of Early Child Development (SECD), a knowledge mobilization initiative that makes current research accessible to those interested in learning about the impact of early years on children’s lifelong health and well-being.

Developed in partnership with the University of Toronto and the Aga Khan Development Network, SECD is updated regularly, bringing research and concepts to life — via online readings, videos and interactive activities — for front-line workers, educators and parents in more than 40 countries around the world.

In January 2018, SECD was the inaugural recipient of the Canadian Association of Research Administrator’s Public Engagement and Advocacy Award, which Sanderson described as “particularly exciting, as our primary goal in developing SECD is to make the rapidly expanding science engaging and accessible to those who make a real difference in children’s lives.”

“Our team has had the opportunity to work with many amazing committed partners around the world, who are now using SECD to develop the next generation of champions for young children,” she said at the time.

A year earlier, the project was honoured by the Lawson Foundation for Innovation in Early Child Development, and in May 2018, the province announced it would cover licensing fees to provide students and professionals in Manitoba with free access to SECD resources.

While at RRC, Sanderson has also supported and led a number of initiatives aimed at supporting children living in economically challenged circumstances, through the implementation of the Abecedarian Approach. Recent projects include Community of Change, a partnership with Healthy Child Manitoba and Manidoo Gi-Miini Gonaan that explores the impacts on parents of an Abecedarian early child care intervention in an urban social housing development.