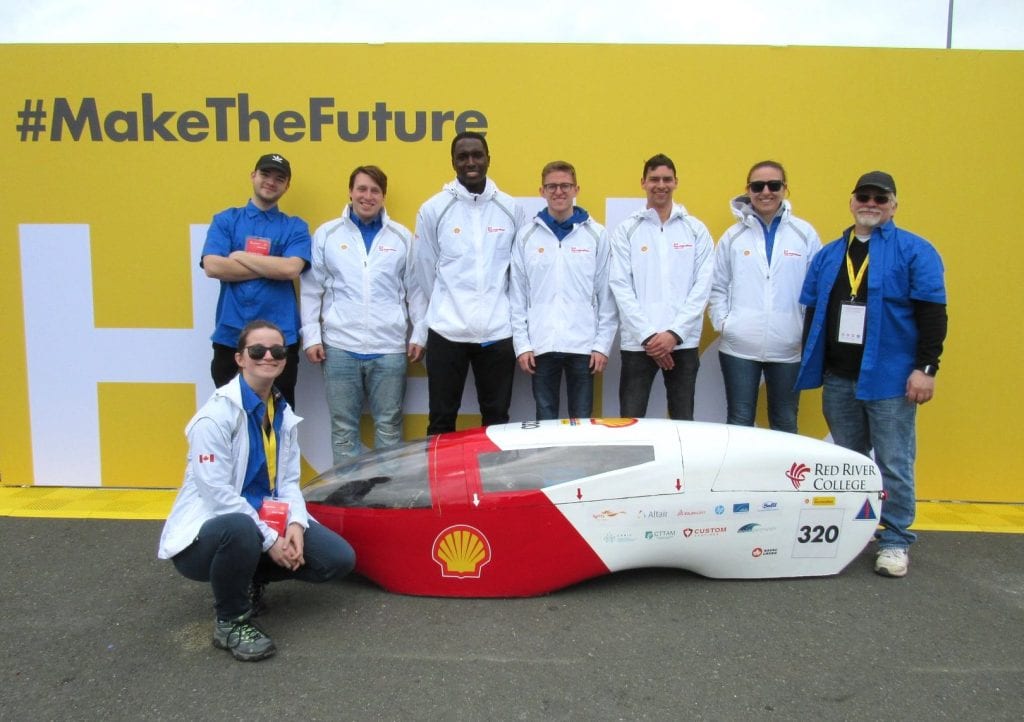 For the second year running, a team of Mechanical and Electrical Engineering Technology students from Red River College have taken their battery-electric vehicle — dubeed SpaRRCky — to Sonoma, California for the Shell Eco-marathon.

The team beat their personal best, moving from a 14th-place finish last year to seventh overall in the battery electric category. And while this year’s race was ultimately a success, it wasn’t without its challenges.

“Going into our first run was the most nerve-racking part of the competition,” says team captain Joel Turner, an Electrical Engineering Technology student at RRC. “Our first set of available runs had been postponed due to rain, which furthered our nervousness, but as soon as we got off the line it was high fives and smiles all around!”

Nerves aside, the team also had to deal with various technical challenges. During the first run, SpaRRCky’s cover came loose and the team’s driver (Samantha Sousa, a Welding student who also constructed the racer’s steering knuckle) had to pull over for her own safety and the safety of the others on the track.

“Once we got the car back, we quickly brainstormed and fixed the problem on the fly, got SpaRRCky back in line, and were able to make the next run,” says Turner. 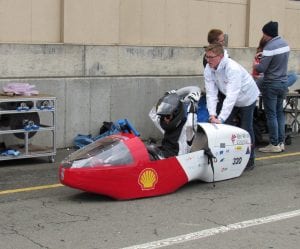 Sousa noted that the first run track was the most nerve-wracking part of the competition, thanks in part to the weather.

“The rain was pushing our time slot back and the pavement was slick. I also had not driven SpaRRCky on pavement yet, only in the gym as we still had snow in Winnipeg,” she says.

But the stress didn’t stop there. “After our third run, a housing bolt had become stripped and we could not attempt another run with the vehicle in this condition,” says Turner.

Thanks to the team’s quick thinking and a visit to a local hardware store, they were able to make the fix and move on to the next run and a seventh-place finish.

The team already has plans in place to continue improving SpaRRCky for future competitions, including implementing data acquisition, fine-tuning the mechanical efficiency, and more training for the drivers — including time spent playing racing video games, a suggestion that came from another team. Racing games can help drivers learn to hit the most efficient angles at turns and determine when to coast and when to accelerate.

The RRC team currently has every intention of competing again in the future. Turner credits his College experience in preparing him for the race, and notes the marathon itself is a great way to gain hands-on experience.

“The Shell Eco-marathon allows us the freedom to design and implement our ideas and put them to the test along with top universities and colleges in North and South America,” he says. “This experience is something we can put on our resumes that very few students have, which gives a competitive edge when entering the job market.”

Sousa echoes his sentiments: “It was the perfect end to my College program. My last day was the Friday before the competition — it put a different spin on my experience than I thought I would get. I will always remember this and my time at Red River, because this was unforgettable.”

The Shell Eco-marathon invites student teams from across the Americas to design, build and race cars that aim to go the furthest distance while using the least amount of energy.

RRC Polytech · 6 days ago
@RRC
Today is Orange Shirt Day #EveryChildMatters, a time to recognize survivors and those who never made it home from Residential Schools, ensuring they are never forgotten. Learn more about the College’s t-shirt design by local artist, Peatr Thomas: https://t.co/K5nMNJRttN https://t.co/Qx3j6SD04Y
View on Twitter
0
4
RRC Polytech · 6 days ago
@RRC
RRC Polytech is ready to support you at any stage of your journey: whether you’re choosing a program and navigating admission requirements or applying and getting ready for classes. https://t.co/HWrzBsNdh4
View on Twitter
1
1
RRC Polytech · 7 days ago
@RRC
Diversity counts on our campuses. Jenny Wang, International Projects and Student Recruitment Officer, shares why she’s participating in the Diversity Self-Identification Survey: https://t.co/QwiaHVRKje #CountMeINcluded https://t.co/0hWpXeBlIU
View on Twitter
0
3
Red River College Polytechnic > News > Applied Research > SpaRRCky flies: Student-built electric car cracks top 10 at Shell Eco-marathon