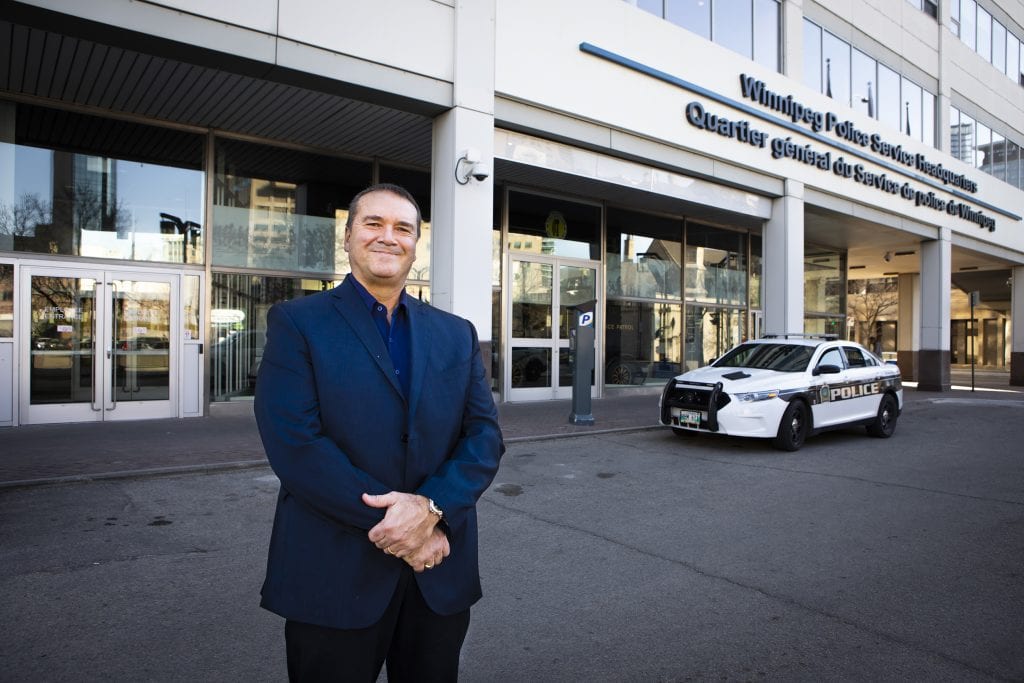 Staff Sgt. Bob Chrismas, a 30-year veteran of the Winnipeg Police Service, is the newly appointed instructor of RRC’s Justice and Public Safety program, available via part-time or online delivery.

“They (the College) reached out to me. They said they needed an instructor for a course called Policing in the 21stCentury,” says Chrismas, now 56.

He’s not joking. In 2013, McGill-Queen’s University Press published Chrismas’ book Canadian Policing in the 21st Century: A Frontline Officer on Challenges and Changes. It was the runner up for best non-fiction at the 2014 Manitoba Book Awards.

“Some major issues are how we engage technology, centralizing versus decentralizing, and being proactive as opposed to reactive — community-oriented rather than just reacting to issues,” Chrismas explains.

“I guess mid-career, I took on a stronger interest in being more collaborative and community-oriented. I was a hardcore investigator. I worked in a lot of specialty areas, but when I started getting involved in counter-exploitation work and child abuse — eventually I ended up running our Missing Persons Unit — I really realized that the police can’t tackle any of these major social issues alone. We need to be only a part of a system, a collaborative effort.”

Chrismas’ dissertation, titled Modern Day Slavery and the Sex Industry: Raising the Voices of Survivors and Collaborators while Confronting Sex Trafficking and Exploitation in Manitoba, Canada, won the university’s Distinguished Dissertation Award for 2017.

Chrismas’ success in his studies is made all the more impressive by the fact that at age 16 he quit high school to enter the workforce.

“I wanted to be a good role model for my four kids. I wanted to exercise my full potential and try to self-actualize,” he says.

“I left school when I was young, but I knew it was important to eventually go back. When I had an opportunity to do it later as an older adult, I just couldn’t waste the opportunity. I always tell people not to flush an opportunity down the toilet. There are billions of people in the world who would give their right arm to go to school.”

In addition to being a police officer and a published author, Chrismas recently started a consulting company, writing and speaking on “policing trends, community collaboration, collective impact and governance,” according to his website, www.bchrismas.com

The Canadian Policing in the 21st Century course will run Thursday evenings starting in April.

“I’ve had the privilege of being able to go all the way through my MPA and PhD — and my career in policing — and I really feel compelled to give back to the community by teaching a course,” Chrismas said.

“I’m trying to pay it forward for all the opportunities that I’ve had.”

RRC Polytech · 5 hours ago
@RRC
Begin your career in Residential Decorating. This full-time, four-month certificate program is offered in person at the Notre Dame Campus in Winnipeg. Also offered on a part-time basis.