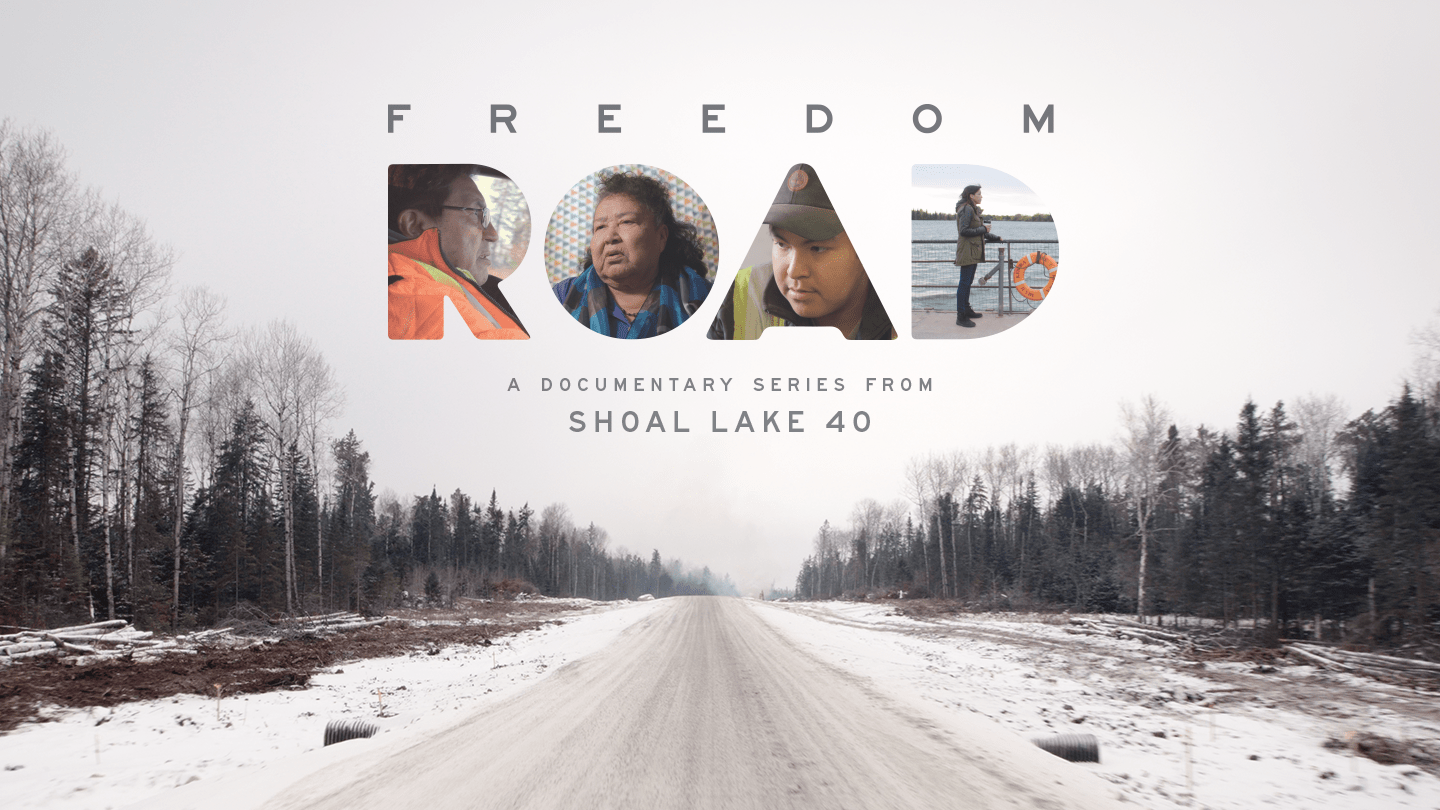 Gi wii ko mi goo (join us in Ojibwe) for our second annual Truth and Reconciliation Week. You will be guided through an exploration of local Indigenous cultures, histories, themes, and issues to help you deepen your understanding of Truth and Reconciliation and respectful cultural awareness. All are welcome to participate in special events and join the conversation.

This an important week as Wednesday, Sept 30 is Orange Shirt Day: Every Child Matters, and Sunday, Oct 4 is Missing and Murdered Indigenous Women and Girls Awareness Day.

We hope you will walk with us.

We are  thrilled to present the National Film Board of Canada’s Freedom Road. Please feel free to share the password, the more the merrier. We will close TRC week on Friday, Oct 2 with a Freedom Road live panel discussion at noon over WebEx.

Freedom Road is a five-part documentary series that tells the inspiring story of Shoal Lake 40 Anishinaabe First Nation and their battle to build a road, after their community was forcibly relocated and cut off from the mainland over 100 years ago, so that water could be diverted to the city of Winnipeg. Director and Shoal Lake 40 member Angelina McLeod uses an innovative, community-driven approach to storytelling that highlights the community’s dignity, strength and perseverance, as they take back control of their narrative and their future in the process of building Freedom Road.

Singer and composer Co Co Ray Stevenson opens up the week with an Honour Song.

Spirit and Intent of Treaties: Discussion with Elder Harry Bone
Available for viewing on demand

We hear Treaty Land Acknowledgements in introductions and at events all the time, but what is the history and importance of Treaties?

Elder Harry Bone has worked tirelessly and quietly throughout his life to bolster Indigenous rights. He is a member of Keeseekoowenin Ojibway Nation, where he served as a Chief and Director of Education. He also worked as a CEO at the West Region Tribal Council and as a Director of the Manitoba Indian Education Authority. Elder Bone was also a Director of Native Programs for the Federal Government and he served as a Vice-President of Aboriginal Cultural Centres of Canada. Elder Bone is currently a member of the Assembly of Manitoba Chiefs Elders Council where he continues to be the Chairperson of his colleagues.

You may have seen jingle dresses, but where do they come from, and what does it mean? Jingle Dress Dancer Sherry Starr shares an origin story and gives us a demonstration.

Did you know? Winnipeg Streets & Neighbourhoods with Louis Riel Institute
Available for viewing on demand

How well do you know your Winnipeg history? Shirley Delorme Russell, Instructor of Métis Culture & History at the Louis Riel Institute, give us insight on the historical significance to names of streets and neighbourhoods, including 7 Oaks, Kildonans, fur trade and more as part of their Red River Cart Adventures series.

You can support the Orange Shirt Day Organization by purchasing a shirt Every Child Matters shirt by Red Rebel Armor , a clothing line by RRC Social Innovation and Community Development student Sean Rayland.

Paint with Gayle Sinclair
Available for viewing on demand

Are you ready to paint? Take some time to heal your spirit with a painting demonstration with artist Gayle Sinclair.

From Norway House Cree Nation, artist Gayle Sinclaire has pursued the use of colour through oils and acrylics on canvas and paper for the last 37 years. Her work is in the collections of the Manitoba Assembly of Chiefs, the community offices in Norway House and Cross Lake, and the homes and offices of numerous private patrons.

We are partnering with the Winnipeg Art Gallery on the next Decolonizing Lens screening of TUNNIIT: Retracing the Lines of Inuit Tattoos and Wearing My Culture themed around the new exhibit Inuk Style. Live discussion to follow with the directors Alethea Arnaquq-Baril and Ulivia Lay Thomassie.

FREE entry, or watch a live stream on the WAG Facebook Page

Click here for more information and to watch trailers.

Our very own Elder Paul Guimond shares a message and song with us to honour Missing and Murdered Indigenous Women and Girls Awareness Day.

RRC Library has compiled three “cinematic journeys” that address topics central to Truth and Reconciliation Week. Miigwech to our friends in the RRC Library!

More Information on Truth and Reconciliation Week Guests and Topics

Elder Harry Bone has worked tirelessly and quietly throughout his life to bolster Indigenous rights.

He is a member of Keeseekoowenin Ojibway Nation, where he served as a Chief and Director of Education. He also worked as a CEO at the West Region Tribal Council and as a Director of the Manitoba Indian Education Authority. While a graduate student in political studies at University of Manitoba he was a Student Advisor and Lecturer. Elder Bone was also a Director of Native Programs for the Federal Government and he served as a Vice-President of Aboriginal Cultural Centres of Canada. Elder Bone is currently a member of the Assembly of Manitoba Chiefs Elders Council where he continues to be the Chairperson of his colleagues.

Elder Bone’s expertise in First Nations governance at the community level is well regarded. He has led delegations that have met with all levels of government and has been instrumental in furthering many projects for the benefit of all Manitobans, such as the Oral History Project and the Historical Atlas of First Nations in Manitoba. Elder Bone and Elder Doris Pratt co-authored Untuwe Pi Kin He – Who We are: Treaty Elders’ Teachings Volume, a book that documents the traditional laws and customs of Indigenous peoples in Manitoba in a way that is accessible to all interested readers; it is not a revision of history but rather a retelling of history from Indigenous historians, giving them an opportunity to reclaim words and inject new power into them. Like Elder Bone, the book aims to inspire people through compassion, reason, humility and human dignity.

His distinguished achievements in leadership, scholarship and public service have been widely recognized by the many individuals and communities who have touched by his work. The University of Manitoba honoured Elder Bone with an Honorary Doctor of Law degree for his tireless and trendsetting work that continues to advance Aboriginal education in Canada.

In December 2017, Elder Bone was announced as an appointee to the Order of Canada “for his contributions to advancing Indigenous education and preserving traditional laws, and for creating bridges between Indigenous and non-Indigenous people and communities.”

About Orange Shirt Day:
The annual Orange Shirt Day on September 30th opens the door to global conversation on all aspects of Residential Schools. It is an opportunity to create meaningful discussion about the intergenerational effects of Residential Schools and the legacy they have left behind that affect all. A discussion all Canadians can tune into and create bridges with each other for reconciliation. A day for survivors to be reaffirmed that they matter, and so do those that have been affected. Every Child Matters, even if they are an adult, from now on. Former student Phyllis (Jack) Webstad told her story of her first day at Residential School when her shiny new orange shirt, bought by her grandmother, was taken from her as a six-year old girl.