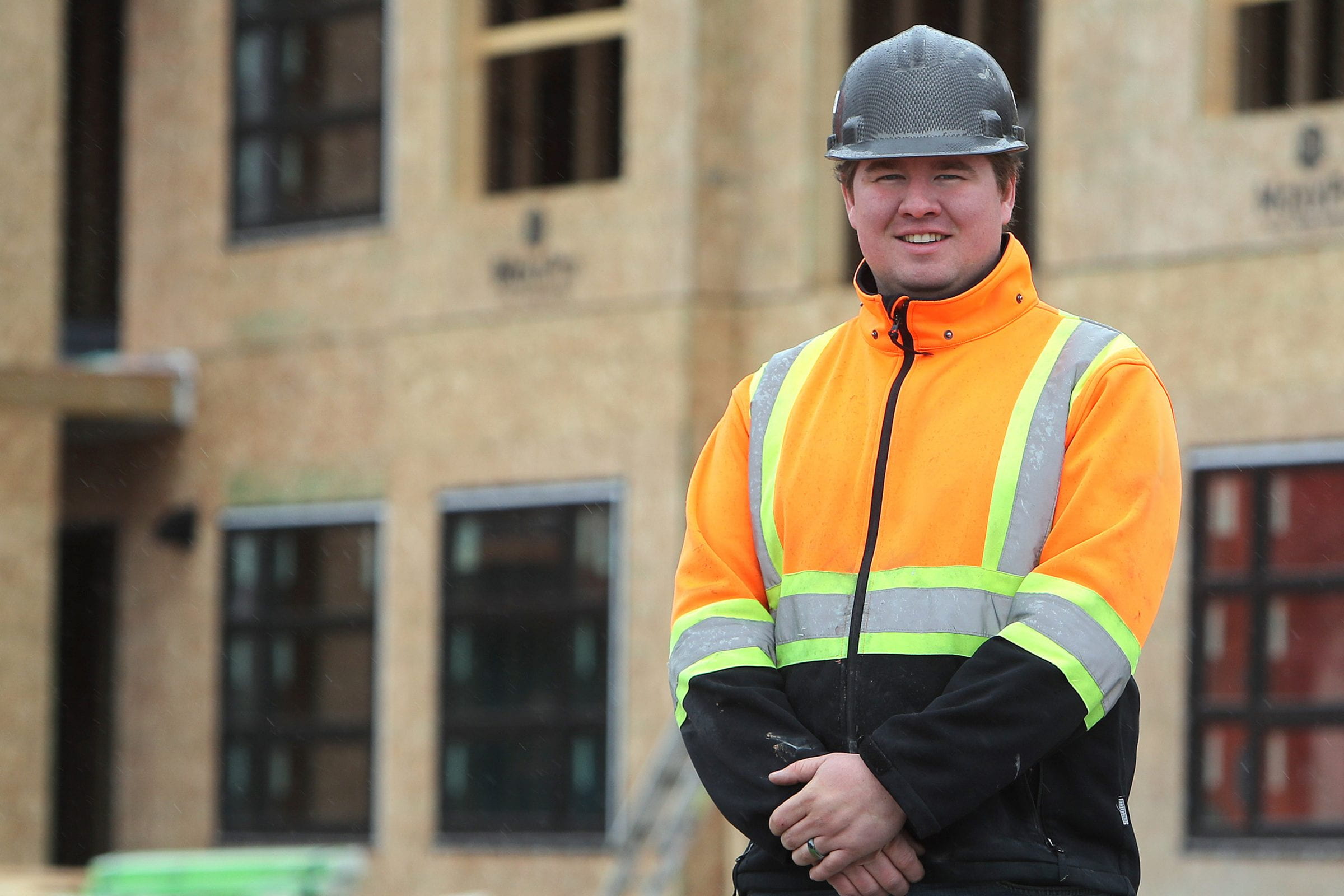 Joe Froese’s career is all about the hustle.

From his first day as an apprenticeship student, Froese made sure nobody ever outworked him. Now, at 27, as a journeyman carpenter he co-owns two businesses with his father, George – the man who instilled in him a strong work ethic.

In 2002, the elder Froese founded Access Framing Inc. (@accessframinginc) in the family’s home community of Grunthal, in southeastern Manitoba. The company puts up wood frames for residential and commercial buildings. George is also known in the area as a pastor at Bothwell Christian Fellowship, in New Bothwell.

Joe joined his father at Access Framing as an apprentice carpenter in 2012, and he bought into the company two years later. After completing high school at that time, he transitioned into the Carpentry program at Red River College and graduated in 2017.

There’s value in the program for students who want to take the incentive and further themselves, says Froese, adding his own education at the College helped him to hone his problem-solving skills. “I think Red River College put me far ahead of where I would have been, if I had just worked hard in the trade and ‘worked my way up,’ kind of deal. It definitely helped me get ahead,” he says.

In 2019, with backing from his father, Froese started a second company, Access Building Ent. (@accessbuildingent), to work on start-to-finish new home builds and general contracting.

“I had an opportunity that presented itself to me,” he says. “I had it in the back of my mind that I’d like to do start-to-finish home builds. A buddy of mine had a house that needed repair, and he could not afford to fix it up. So, I bought the house and the land from him. I tore the house down, subdivided the land, and we built a few new homes.”

Froese describes carpentry as “a hard, physical, demanding career path,” and he says a person’s attitude plays a big role in their success.

“My instructors at Red River College were helpful; especially if you showed an interest in carpentry, which I did,” he says. “I wanted to become the best at it that I could be when I started, and they helped me to achieve that.”

Froese still works closely with George. Not every day working with his father is perfect, he admits. “Some days, we just don’t get along,” he laughs. “But for the most part, we get along and have a good relationship that way.”

His advice to students who want to break into the framing and construction business is to pay attention, learn how to use the tools, and understand the basics first. “Once you are in the trade, hopefully you will apprentice with a crew that will teach you, and not just expect you to know everything. Listen to what they tell you and grasp the concepts. Then they will start giving you more responsibilities. You can work your way up quickly, actually, if you show that initiative.”

“I have a crew leader who is a journeyman carpenter now; he’s one of the best employees I’ve ever had. He was with me for about a month before I had him marking out walls. I have had other guys who take years before they ever get to doing something like that,” says Froese. “He grasped the concepts quickly, and he wanted to be there. That makes a huge difference: if you are just looking to collect a paycheque, at the end of the day all you will do is collect a paycheque.”

Access Framing employs two eight-person crews that work year-round putting up light commercial to large commercial wood frame buildings in Winnipeg. Froese oversees the operations, solving problems as they arise, in addition to being responsible for pricing and estimates on behalf of the company.

The start of the pandemic in spring 2020 was an especially hard time for Access Framing, as it was for many other Manitoba businesses. “In spring 2020, I had to shut down one whole crew. We laid off half of our employees,” says Froese. “Now, we’re back to being busier than ever before…I was able to rehire a couple of them, but I ended up having to hire mostly new people.”

Meanwhile, Froese juggles his responsibilities with Access Building as well. Last year, he supervised the builds of two start-to-finish new homes in the Grunthal area and is working on finishing three more homes this year.

For the new homes, Froese acts as a general contractor. “I have a framing crew that comes out and does my framing; I have a concrete guy; I have people who do the windows, and the roofing; I line up all the trades and I oversee everything. My goal since I got my Red Seal and became a journeyman was to do more managing, rather than the actual building,” he says.

Supply disruptions caused by the pandemic have caused materials to soar in price, he says. “People are coming to you, wanting a price for something, and when you give them the quote, they tell you the price is too high. Either everyone is going to just stop building, or at some point, the prices are going to have to come down,” he predicts.

Froese also sees a shortage of workers looming in the construction industry. “My main difficulty is having enough employees to handle the amount of work we have,” he says. “I think there are lots of opportunities for workers to grow; especially if you can get in with good companies, you should never have a hard time finding work.”