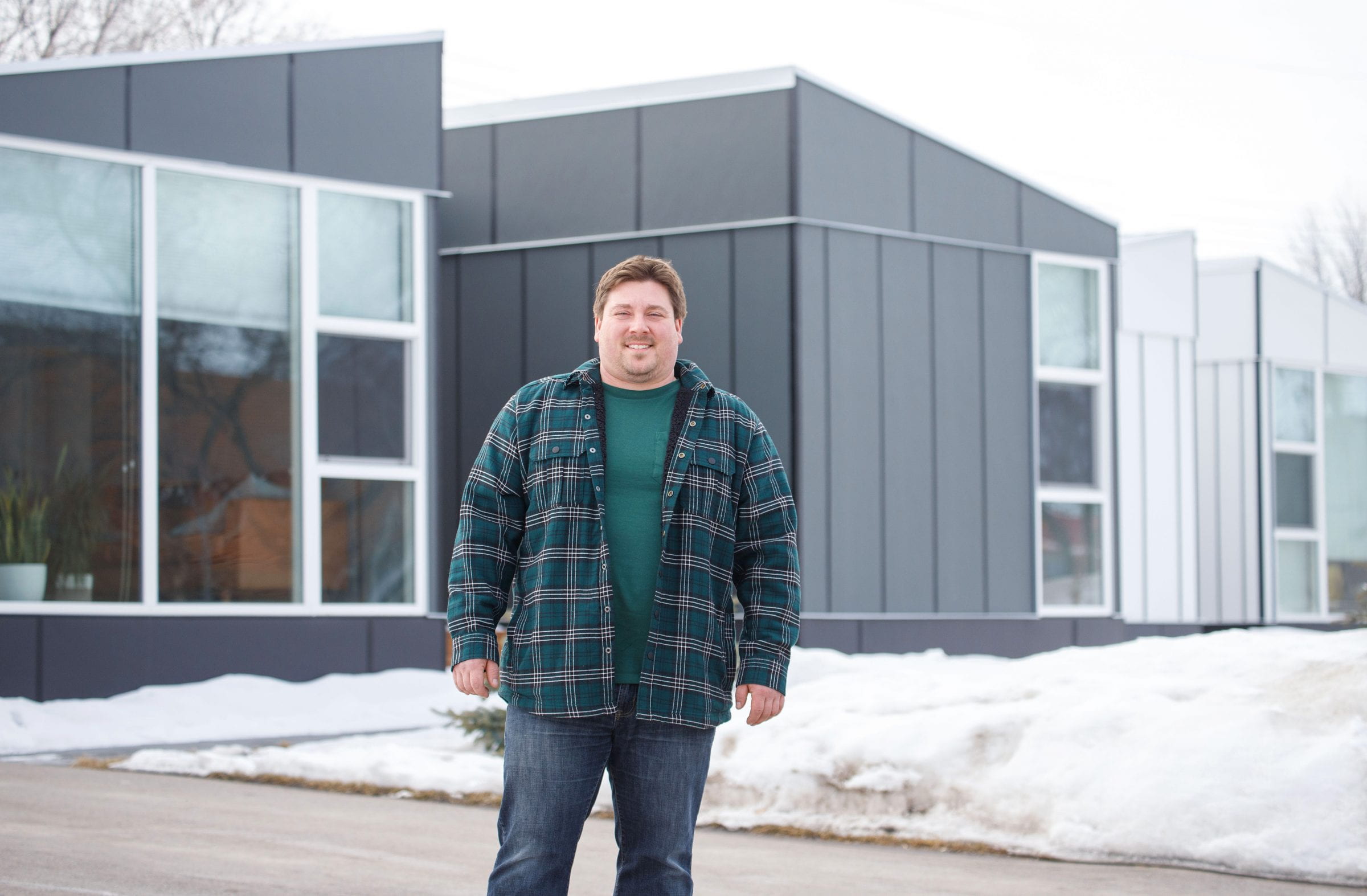 “We named our company Mezzo because it means ‘middle’ or ‘medium’, and that’s just what our Mezzo home is.”

After first exploring concepts as small as 200 to 300 square feet, Vitt and company came up with what is now their main model – a 764-square-foot home on a 48 by 60 foot lot, complete with generous storage space and amenities, such as in-floor heating and a deck, for $230,000.

“At the end of day, the home has to work for its environment,” Vitt said. “We live in Manitoba, we have four seasons, and homeowners need some space to store things.”

The Mezzo is making its mark as “tiny home” champions throughout North America and around the world continue to spark an architectural and social movement in response to growing concerns related to home affordability and environmental sustainability.

Vitt experienced the demand in Manitoba’s Interlake firsthand in spring 2018, when Mezzo Homes staged their first-ever Open House in Selkirk.

“We didn’t know what to expect. We planned to go from 11 a.m. to 3 p.m. on a Saturday. I got there early, and we started taking people through at 9 a.m. We lost count when we went over 500 people. Three people signed up to buy that day.”

Who wants a Mezzo? It seems the answer is “all kinds of people”

“We thought it would be seniors, retirees, and possibly first-time home buyers,” he said “Then we sold a home to a 40-year-old man living on his own. Some buyers are commuters to Winnipeg, others live and work in the Interlake. We realized there weren’t limits to who might be a customer.”

Mezzo Homes recently sold its 16th home in a Selkirk development. A second Mezzo development is underway in Gimli, with plans for 27 homes.

“That’s where we get great feedback. They’ve become our friends, really.”

As the Covid-19 pandemic carries into a second year, there is demand for a dwelling smaller than the Mezzo, Vitt noted.

“The Micro Mezzo was re-born,” he said, referring to the company’s early, smaller designs. “Among the many roles it can serve – a Granny suite or a rental property, for example – the Micro is excellent for temporary Covid-19 quarantine housing that can later be placed permanently. Physical distancing has become an important consideration.”

In 2020, the Manitoba Metis Federation (MMF) purchased several tiny homes as potential isolation units for the Métis Nation, should members require quarantine. In a Winnipeg Free Press story published in September of last year, Will Goodon, MMF Minister of Housing & Property Management, cited the appeal of the Micro-Mezzo’s four-season use and long-term adaptability.

“Our homes are raised off the ground,” Vitt said. “There’s no crawl space or basement to get wet. They’re energy efficient. They meet and even exceed building codes, which some types of small homes don’t.”

That Mezzo homes are of high quality should be no surprise. At age 10, Vitt started helping his father, Joe, a general contractor known for his meticulous approach to building projects. After working in lumber yards in his late teens and early twenties, Vitt continued to refine his own construction skills. Over the years that followed, he branched out into general contracting and real estate.

In 2003, Vitt turned to Red River College to complement his craft with a solid foundation in business principles. Through evening classes at Red River College’s Interlake Campus, he honed his Business Administration acumen.

“I knew I wanted to become an entrepreneur. I wanted the knowledge base. Accounting, management, marketing – it was a great help, all that education. I still refer to the textbooks.”

“The College is a really good option to further your learning.”

Jason and Amanda Vitt live in East Selkirk with their three children, ages 14, 11, and 7. While the Mezzo isn’t the main home for this busy family of five, Vitt said he’s watching for a property where he can put down a Mezzo cottage.

And he’s excited to keep building the Mezzo brand.

“Our small homes represent a certain lifestyle that’s growing in appeal. I’ve said, ‘When you see a snowmobile go by, you might call it a Skidoo.’ We want people to think of the Mezzo when they see a small home.”