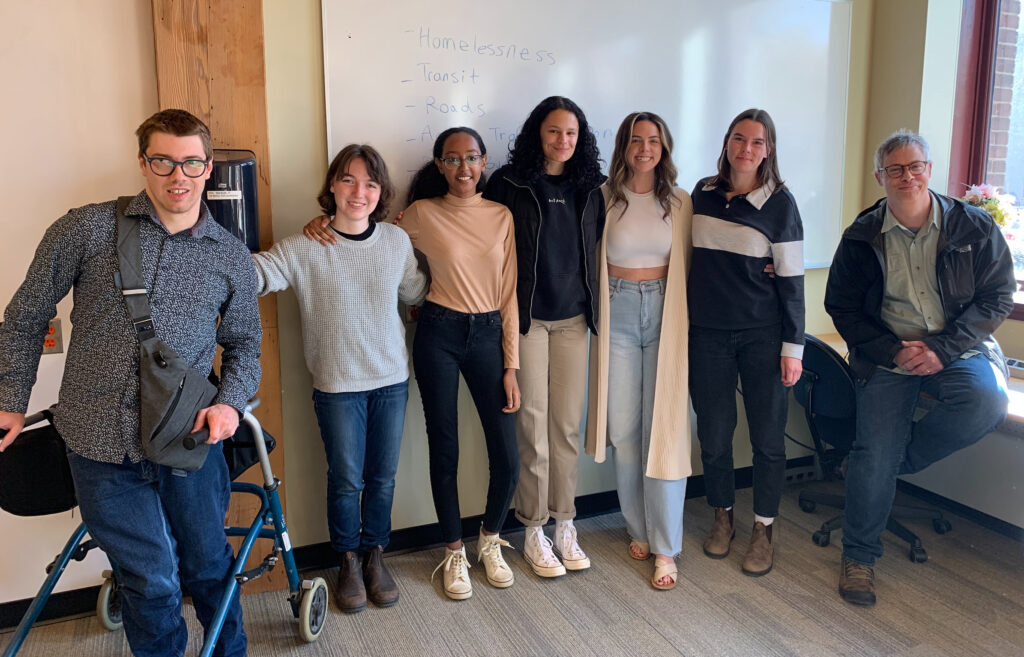 All 11 mayoral candidates in the upcoming civic election claim their plan will make Winnipeg better, but a quick Google search of the phrase reveals that journalism students in RRC Polytech’s Creative Communications (CreComm) program are already delivering on that promise.

Their project, winnipegbetter.ca, is impacting the city’s race for mayor by giving potential voters exactly what they’ve asked for — a comprehensive website to help them make an informed decision on Oct. 26.

“A frequent complaint from consumers of news is that during elections, the focus is placed on polling and personality conflicts, not the issues that real people are facing,” says Turner.

So, he and his student journalists launched winnipegbetter.ca to cultivate dialogue leading up to decision day and provide a go-to resource on civic issues that voters deem most important.

“Journalism is a public service,” he says. “What this project emphasizes to students is that you work for the readers, the voters and the audience. So instead of letting the politicians tell you what’s important, be the conduit that allows the public to determine what the candidates should be talking about.”

Current second year students spent months gathering people’s viewpoints through in-person interviews, online forms, and social media. They asked a simple direct question: “What do you want candidates to be talking about as they compete for your vote?”

The result is a Citizen’s Agenda of six key issues:

The six students then researched each candidate’s public stance and plan for improvement in these areas of concern and spelled them out in point form, building a quick reference Voter’s Guide that provides contact information and prospective policy, and is easily comparable.

The response was so amazing — over 5,000 hits a day and tons of social media buzz — that even in the campaign’s homestretch, the candidates are taking notice. They’ve begun to accept open invitations to address the Citizen’s Agenda in class, and have their unedited conversations posted to the site for all voters to see.

“What they’re doing is great work and Winnipeggers, including my team, are noticing and using the website,” said candidate Rick Shone after answering student questions for almost 40 minutes. “They didn’t just read and analyze policy statements, they gauged what’s important on Twitter and other social media, so we need to listen to students and all youth who are engaged in civic matters.”

Team member Caleb Dueck, who hopes his experiential learning will someday lead to a job with the CBC, says the candidates who take part are helping both themselves and his fellow students. “They answered our questions pretty well, and we learned a ton about interviewing, research and writing. It’s certainly a really good feeling to help voters educate themselves.”

Feature stories have been added to the site to allow student journalists to hone their long-form writing skills by delving deeper into the issues that average, every-day voters say they’re basing decisions on. The site also provides links to important details such as advanced and election-day polling locations and voting procedures, and gives continuous updates of #wpg22 posts on social media.

Sierra Sanders is proud of the quality of work done by her tight-knit class and says the Winnipeg Better project has given her valuable perspective.

“It’s intimidating — you don’t want to mess it up,” she says. “You want to make sure you’re diligent in fact checking, that everything you write is true because it’s influencing people’s decisions, and while a conversation feels small sitting in this room, it’s part of something so big.”

With fresh content being uploaded daily, Turner says his students are already prepared to be valuable contributors in a professional newsroom and have ensured the Winnipeg Better project will live up to its name, regardless of who becomes the next mayor.

“When you’ve got big political events happening, it’s important to shape the content of the course around them because it puts students in the thick of things. As active participants, they’re creating something that is meaningful and consumable. People want information that minimizes political rhetoric and jargon, so this gets them back to the core function of journalists, examining the issues that matter most to those who ultimately hold the power in elections, the voters.”