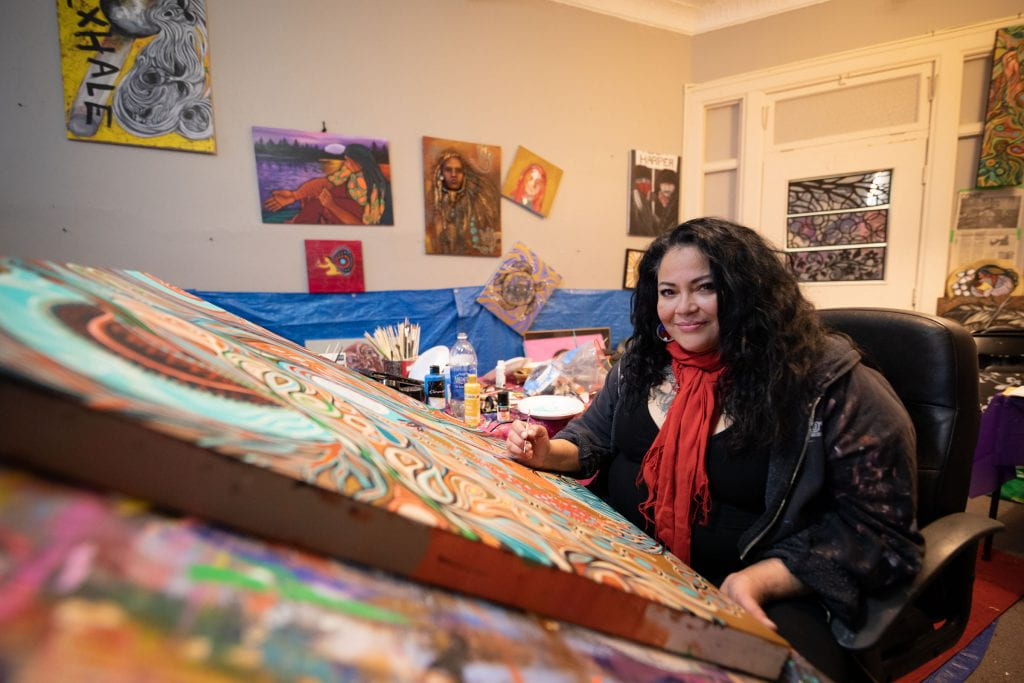 When Jackie Traverse was 13 years old, she would sneak out of school to watch an artist paint a Jackson Beardy mural on Selkirk Avenue. Now, 37 years later, she’ll be creating the artwork for a prominent corner of Red River College’s new Innovation Centre, a 100,000-sq.-ft. building in Winnipeg’s Exchange District.

“As a kid I remember thinking, ‘Just wow.’ It was such a big deal for me to see a building with Native artwork being put on it. It was the first time I had seen something like this, on this scale, that felt like it was for me,” she says. “So for me to be doing the same thing now, it makes me proud.”

Traverse is a multi-disciplined Anishinaabe artist who works predominantly with paint on canvas. She was born in Winnipeg and knew she wanted to be an artist from the time she was four years old. A graduate of the University of Manitoba’s Fine Arts program, Traverse is known across Canada for her powerful art, which speaks to the realities of being an Indigenous person.

The College collaborated with the Winnipeg Arts Council in the search for an artist for the project, which will be featured both inside and outside the building’s fourth-floor ceiling, spanning approximately 1,000 sq.-ft. The large overhanging parapet, a gesture to the historic warehouse architecture, was a perfect canvas for a piece of public art to be seen from blocks away, and to act as a lantern atop the new building.

Out of the five artists who were shortlisted to present, Traverse’s concept and story won over the panel.

“The concept she presented was very powerful and resonated with us,” says Patrick Kuzyk, chair of RRC’s selection committee. “One of the goals of the Innovation Centre is to create a hub where students, businesses, entrepreneurs and community members can come together and collaborate on ideas. Her concept depicts a traditional gathering place and we were inspired by the connection.” 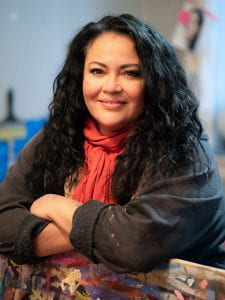 The piece Traverse is creating is inspired by The Forks, where the Red River and Assiniboine Rivers meet. It will incorporate the 13 moons (which could be interpreted as rocks to represent the Grandfathers), people, bear paws, and the Oodena Celebration Circle.

Traverse hopes that each person who views the painting can find their own interpretation or meaning.

“I think it’s really important to have it in downtown Winnipeg,” she says. “A lot of people don’t know the history and don’t understand why there are so many Indigenous people in the Portage Avenue and downtown area. Our people have had a history with this place for thousands of years. It’s in our blood memory and our DNA. We’re drawn to the place of our ancestors and the footsteps they left behind.”

Winnipeg has the highest population of Indigenous people of any major Canadian city, with the majority living in or around downtown.

“I’ve been wanting to tell that story about Indigenous people having a right to be in the downtown area for so many years,” says Traverse. “If you just wait long enough, your visions and your beliefs in your heart will find a way to come to fruition. And I’m thankful Red River College picked me to do this.”

Jackie Traverse’s piece for Red River College’s Innovation Centre will be revealed at an event in early 2020.

Careers in accounting: Certificate program opens doors to roles in a variety of businesses

RRC Polytech · 1 day ago
@RRC
Love seeing our students getting hands-on experience in the workforce. https://t.co/rGV1GnCOlf
View on Twitter
Dooley PR & Marketing@DooleyPR
School’s out which means we’re welcoming a summer student to our team! Rachel is joining us for the summer before heading back to finish her final year of school at @RRC. We can’t wait to see all the awesome work she’ll create during her time here!