Busy weekend for all 6 Rebels teams, competing both at home and in across the border in North Dakota.

The men’s volleyball team took a huge step forward defeating the former number 1 ranked and previously undefeated Providence University Pilots 3-2 (22-25, 21-25, 28-26, 25-16, 15-11). Middles Jarrell Taylor Babb and Brett Lowe led the offense while Morgan Macfarlane provide some key defensive plays. With the win, the Rebels improved to 5-1 in MCAC play and are in first place. The women’s volleyball team continue to look for their first win of the season, losing to the Pilots on Friday PUC 3-0 (25-14, 25-17, 25-14), and the University of Winnipeg Wesmen on Saturday UW 3-0 (25-17, 25-9, 25-20). Both teams finish the first half of the regular season at CMU on Tuesday, November 24th. END_OF_DOCUMENT_TOKEN_TO_BE_REPLACED

Halloween Weekend offered both Tricks and Treats for the Rebels in volleyball and basketball play. The Women’s Volleyball team dropped their second home regular season game of the year, 3-0 (25-11, 25-15, 25-14) to a strong U of Winnipeg Wesmen squad. Their next game, along with the men, is Friday November 6th at Providence University College against the always dangerous Pilots. Both teams then host the CMU Blazers on the 7th, starting with the women’s game at 6:00pm in the North Gym. END_OF_DOCUMENT_TOKEN_TO_BE_REPLACED 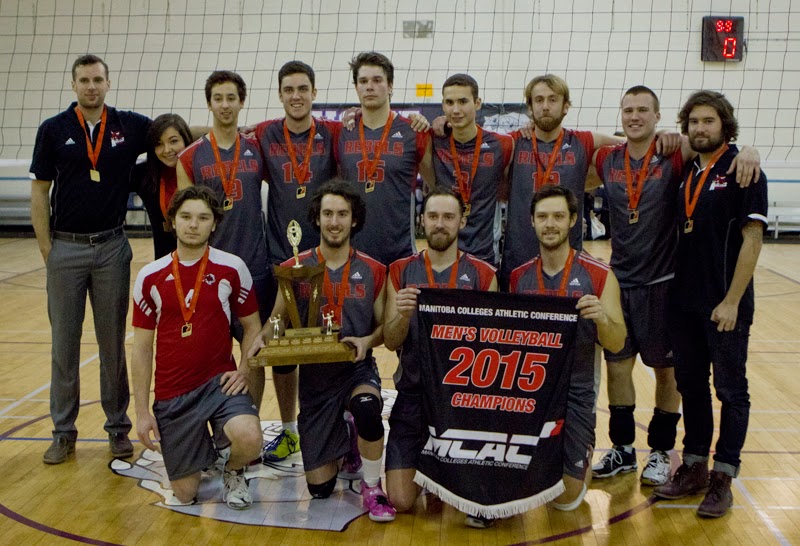 If this weekend’s Volleyball Final Fours have taught us anything, it is to never judge a volleyball game by its first set. Despite two lop-sided opening frames at Assiniboine Community College on Sunday, the crowd was treated to two excellent volleyball matches to put a cap on the 2014-2015 volleyball season. END_OF_DOCUMENT_TOKEN_TO_BE_REPLACED 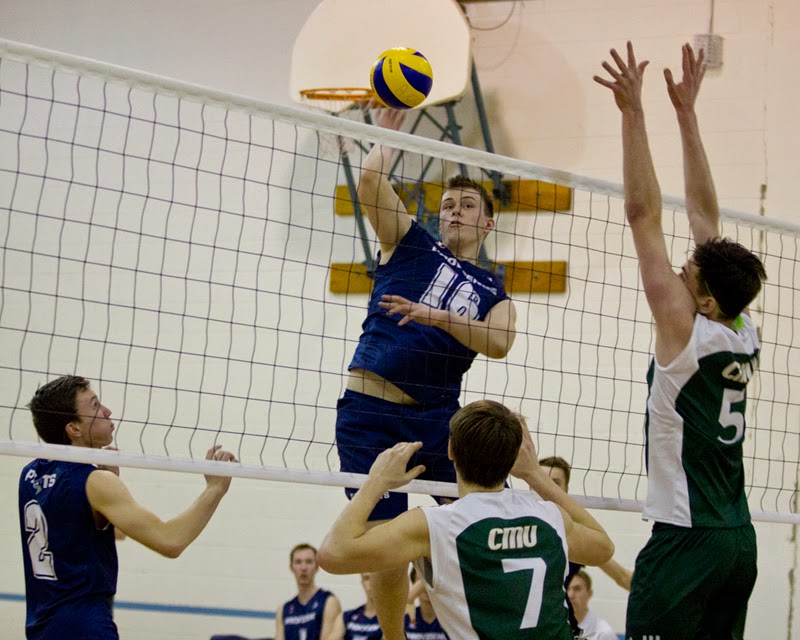 In a day of volleyball where games followed the script the standings wrote for them, it took a classic MCAC rivalry in the final hour to turn it all on its head. END_OF_DOCUMENT_TOKEN_TO_BE_REPLACED

As today’s Final Fours got underway, the Manitoba Colleges Athletic Conference revealed its All-Conference Teams and Most Valuable Players in both men and women’s volleyball to fans, players, and coaches at Assiniboine Community College.

The selections were based on votes by the member schools’ coaches and are listed below: 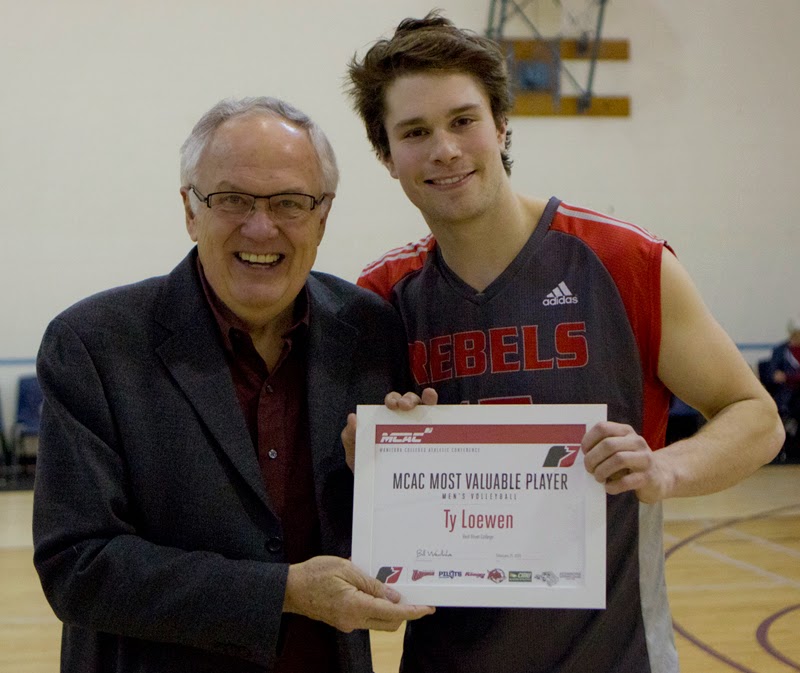 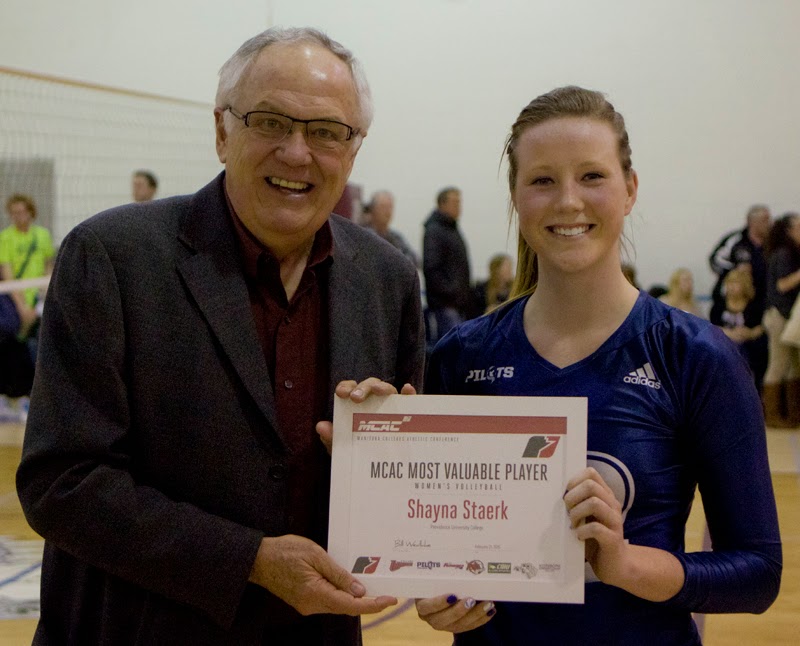 After five months of match-points, clean-sweeps, and fifth-sets, the MCAC volleyball season will reach a conclusion this weekend in Brandon, Manitoba, as Assiniboine Community College hosts the 2015 Volleyball Final Fours.

In the women’s division, there’s a lot to be excited about as far as storylines go. Kicking off the day is the defending champion University of Winnipeg College Wesmen taking on Université de Saint-Boniface. The College Wesmen will be championship-or-bust this year after knocking off the undefeated Pilots in last year’s Final Fours, but face a solid Saint-Boniface team who has certainly earned the right to not be taken lightly.

The final women’s match of the day will see the host team from Assiniboine Community College look to ride their home crowd to success against the Providence Pilots. Providence has won the title four of the past five seasons, and would love nothing more than to avenge last season’s defeat, but the Cougars have some serious firepower at the net and will try to upset a Pilots team who have only lost once this season.

On the men’s side, the Red River Rebels will try to keep their undefeated season alive against Université de Saint-Boniface. The Les Rouges are coming off big back-to-back victories against CMU and Providence, while the Rebels were mere points away from last year’s championship, and are itching to get back to the mountain once again.

In the final match of the day, the Providence/CMU rivalry will be sparked up once again as the Pilots and Blazers will fight for a birth in the finals. These two teams’ talents have shone in spurts this year, and whoever is able to peak at the perfect time will have a real shot at winning it all this season.

Below is the schedule for the Volleyball Final 4’s. Admission for this event is free for all ages.

Before each Saturday match, the MCAC will hand out its All-Conference Team selections and regular season MVP awards to those athletes participating.

Chalk up another successful weekend for the Red River College Athletics program, with all six varsity teams in MCAC regular season action.

The Rebel’s men’s and women’s basketball teams finished their respective regular seasons on winning notes, sweeping a pair of games against Providence University College Friday night. The women Rebels defeated the Pilots 63-55, led by their sensational Freshmen backcourt, Susie Namgung (21 points) and Zeralynn Panesa (20 points). The Rebels finished the season with a sparking 13-2 record. The men’s team finished their season with a near perfect 14-1 record after defeating PUC in a high scoring game, 91-85. The Rebels had four players score in double figures, with Taylor Brown leading the way with 27 points.

Both Rebels teams finished first within the MCAC standings, and will be listed as the favorites going into the playoffs this weekend. The women will face the University of Winnipeg Wesmen in one semi at 4:00PM on Saturday, February 14th with the winner facing either the PUC Pilots or Canadian Mennonite University Blazers in the Championship Final, 2:00PM Sunday February 15th. The men will face the Blazers in their semi at 2:00PM on Saturday, with the winner facing either the Wesmen or Pilots on Sunday in the Championship Final at 4:00PM. All games will be held at CMU.

Rebels Men’s Volleyball continues to roll, defeating CMU at home Friday night 3-0 (25-10,25-23,25-20) and improved their perfect MCAC record to 15-0 on the season. The Rebels have already clinched first place for playoff seeding, and are peaking at the right time coming into the post season. The women Rebels also found themselves in the win column on Friday night, defeating the Blazers 3-2 (15-25,25-23,21-25,25-8,15-11). Both teams finish the regular season in Providence this Friday with the women’s game starting at 6:00PM.

The Rebels women’s futsal team entered the 2nd stage of the season with a perfect 3-0 record, and was able to remain unbeaten after defeating CMU 9-1 and drawing even with St.Boniface 3-3 and PUC 5-5. Elizabeth Codville led the Rebels with 5 goals on the weekend, including a hat trick against PUC, along with some steady goaltending by Brittany Loschiavo.

The men’s Rebels did not fare as well, dropping two lopsided games on Saturday, 8-3 to CMU and 13-2 to USB. They were able to recover on Sunday, defeating PUC 7-1, and improve their league record to 3-3. Both teams next head to Providence February 28-March 1 for the third stage of the MCAC season.

The Rebels men’s volleyball team continued their dominant season Friday night at the North Gym defeating les Rouges from St. Boniface University 3-1(22-25, 25-14, 25-13, 28-26). With the win the Rebels improved their perfect MCAC league tally to 14-0, along with a sparkling 42-10 sets won record. The men’s team has clinched first place, and will begin their playoff run Saturday February 21st at Assiniboine Community College Brandon. END_OF_DOCUMENT_TOKEN_TO_BE_REPLACED