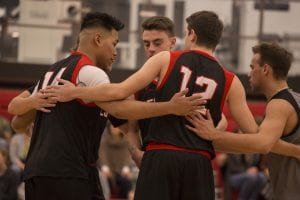 The Rebels have no victories this season, and have won one of 25 sets, operating at a four percent win percentage. The USB Les Rouges, the only other team under .500 in the MCAC and the team the Rebels got their one set win against, have eight set wins.

They’ve only managed to score 20 points in six of those sets.

Of course, some of this could be seen coming. The Rebels, who finished in last place last season, were coming in with a rookie coach and a number of rookie players. A number of players left the team, most notably Josh Goossen, who was the MCAC MVP last season.

Head coach Chris Voth has his team competing hard every set, even if the score doesn’t reflect how hard the team works.

“They have all done such a great job putting in the effort and improving,” said Voth. 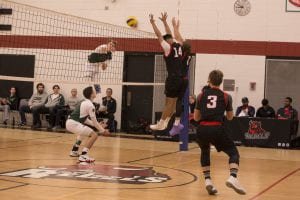 “It’s really hard for me to single out one athlete.”

It’s a rebuilding year for the Rebels where they’re working on building something for the future. They began the year working on serve reception, which has improved 11 percent since the season began, so improvements are happening, even if the gains aren’t showing up on the final scores.

“Now our offense is our next focus: we have some really strong attackers, but like with any team, the chemistry needs to form in order to have a consistent attack,” Voth said.

Voth said the Rebels rebuild has been a fun experience, and he can see the building blocks for something great.

“Going back to the basics and teaching fundamentals is rewarding because you get to see improvements right away,” said Voth.

“I’m also working hard to teach different techniques and tactics that a lot of these guys haven’t seen before. They give me feedback and help teach me new things too.”

Voth is looking forward to success coming for a group he feels deserves some, noting that now that the Rebels serve reception is stabilized, the team can work on other areas to inch closer to a playoff spot that’s not as far as it seems.

“I’m looking forward to seeing how the guys respond and to see what we’re able to accomplish,” Voth said.

The Rebels are back in action on January 10 when they match up against the ACC Cougars.

REBELS LEADERS AT HALF