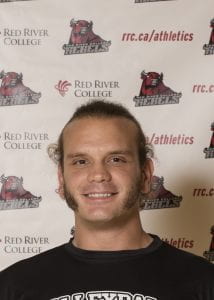 “My entire life I’ve been Deaf and faced barriers, however [I] have learned to work through those when they arise,” Husack said over email.

A lifelong sports lover, Husack said he tries to be involved with as many as he can. He first started playing volleyball in middle school, then began to lose interest in high school, only occasionally playing for fun in rec leagues.

His interest was reignited when it was announced Winnipeg would host the 2018 Canada Deaf Games.

He started having weekly practices with his Deaf team, got involved in the games, and continued to play after the games finished, rediscovering his love for the sport.

“The fast-paced movement on the court, the teamwork, blocking the other team, and the feeling after an amazing kill,” Husack said while professing why he loves volleyball.

After a few more years playing volleyball, Husack transferred to RRC to take the Social Innovation and Community Development program to learn how to help develop and encourage Winnipeg’s Deaf community.

“When researching jobs online, I came across this program which seemed like a perfect fit for what I’m aspiring to do,” Husack said.

“I really like that Red River has a hands-on approach.”

Not long after beginning his education here, Husack tried out for the Rebels and made the team.

Something  else RRC provided Husack is thankful for is the interpreter he has with him at every practice and game, something he didn’t have access to before which makes it easier to communicate with his team.

“Being the only Deaf person on a hearing team, of course it can be awkward for someone to figure out how to communicate with me,” Husack said.

Husack hasn’t let that stop him, however; he works hard every day to prove he’s a team player who can communicate effectively on and off the field to give his team the best chance possible.

He’s developed ways to use gestures his teammates can quickly understand on the court, so they can react to his instructions and he’ll texts his teammates on the sidelines to communicate while resting.

Husack is also pleased with the feedback he gets from head coach Chris Voth and his teammates, as their critiques have helped him become a better player while having fun.

“I have an awesome team and coaches who treat me like anyone else, which has made my [Rebels] experience great,” Husack said.

“I feel very fortunate I have never had to feel discriminated against because I am Deaf.”

Husack said this close bond between he and his teammates is showing on the court, with them getting stronger every time they practice.

“We are already fixing mistakes we made at the beginning of the season and we are improving every game,” Husack said.

“I’m excited to see the progression.”

Throughout Husack’s own progression in volleyball, from middle school to the Rebels, he has learned how special Winnipeg’s volleyball community is.

“Volleyball has taught me teamwork, sportsmanship, and to be humble as a player,” said Husack.

“It teaches you to support one another; you can’t play the sport alone, [you] have to work together.”