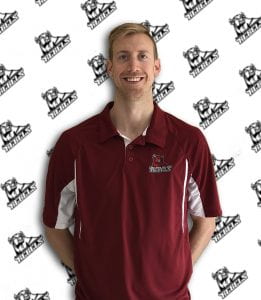 After back-to-back seasons of 2-14 record, the Rebels have revamped their lineup and have a large roster of 16 players to move forward and challenge in the competitive Manitoba Colleges Athletic Conference (MCAC) in 2019-20.

First year head coach Chris Voth played five seasons with the Manitoba Bisons and now is at the helm to bring a new team identity, work ethic and culture to Red River.

Voth commented on the new dynamic with this year’s squad. “We (assistant coach Stef Balko and I) are incredibly happy with our team. There isn’t one player we’d want to go without, which is why our team is so big.”

The start of a new era begins on November 2 on the road against Les Rouges de l’Université de Saint-Boniface (USB) as the Rebels build towards the MCAC Finals weekend on February 29-March 2.

It will take awhile for this large group to be a cohesive unit yet the long-term is the focus. The coaches want to continue to build, grow and improve throughout this season and see gradually improvements into the second half. Voth said, “There’s a lot to learn from just playing matches but we have a long term mindset. We are not only training for this season, but to put Red River back in the forefront and build for future years.”

The new staff will not put any expectations on such a young team but Voth expects the Rebels to ‘play hard and compete in all of the matches and put ourselves in a good situation. Aside from that, we can’t focus on outcome oriented goals…hopefully that happens on its own, once we’ve accomplished certain process goals.’

The optimism is bounding throughout the team as veterans Zach Knight, 6’2” middle/outside hitter, concluded, “I think we have the potential to be a great team. We are very well rounded and once we start building some chemistry I think we can really show some teams up and compete with anyone who comes our way.” The team had struggled in the past to start the season on a positive footing and Julian Waldner, 5’11” outside hitter, thinks this year’s make-up of the squad will see a benefit in the standings. “It’s cool to have such a big roster this year as well as a hard working group…it will be interesting to see how things develop when we have everyone playing together.”

Voth’s challenge is to navigate a team to win while having all 16 members feel part of the new team’s success. He stressed that players will have to be patient to see the court and the hard work will pay off as everyone is needed to drive towards the results they want to a achieve by the end of the 2019-20 campaign.

This exciting opportunity is the potential of the Rebels for the upcoming season with a new start to compete for a championship in the not so distant future.