As of 10:45am Red River College’s Steinbach campus is closed for the remainder of the day.

The campus was evacuated due to the strong smell of gas. Upon callout and response by the gas company, a gas leak was confirmed on the roof.  Repairs are being made and the campus will reopen on Monday, December 1st.

Red River College’s security services mission is to provide a safe and secure environment for all students, staff and visitors to the College.  Security services can be reached at 204-632-2323.

Students attending classes at the Steinbach Regional Campus can contact the campus main line at 204.320.2500 if they have any questions. 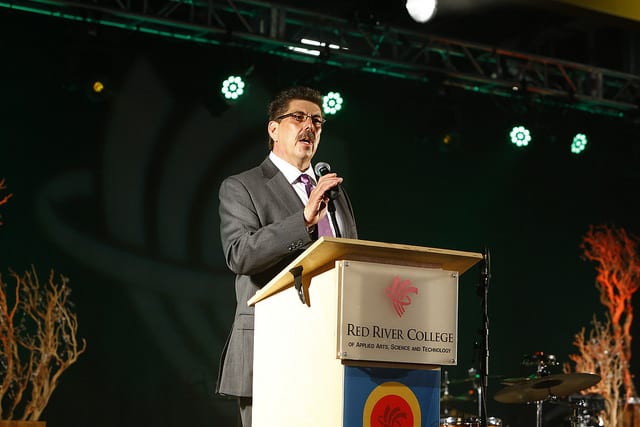 “This recognition is a testament to the leadership and dedication Neil brings to the College and the strong relationships he has developed with the trucking industry,” said David Rew, President and CEO, RRC. “Neil is not only a leader at the College but a leader in our community and vital to ensuring both staff and student success. On behalf of the College, I congratulate Neil on receiving this honour recognizing the many positive contributions he has made.”

Cooke has over 40 years of industry experience working in Manitoba’s transportation sector where he worked extensively in the heavy truck industry as a technician, mechanic, consultant, and 13 years as an instructor at Red River College.

END_OF_DOCUMENT_TOKEN_TO_BE_REPLACED

Having spent more than a decade as an instructor at Red River College, with an extensive background in ironworking, Barry Chetyrbok has created an engaging and challenging applied learning environment to ensure students have the right skills and experience to prepare them for their career.

END_OF_DOCUMENT_TOKEN_TO_BE_REPLACED

WINNIPEG, MB – Red River College received an International Award of Excellence  today for its commitment to social development from the World Federation of Colleges and Polytechnics (WFCP) at their World Congress in Beijing, China.

The award seeks to recognize colleges and polytechnics from around the world for their commitment to community engagement, diversity, and sustainability – with a focus on international campus collaboration, best practices and technologies, and advancing institutional diversity.

“This is another outstanding achievement for the College,” said David Rew, interim president and CEO, Red River College. “Sustainability, international collaboration, and diversity are key focus areas for the College.  Our staff and students make substantial investments in these areas, it is very satisfying to receive this type of recognition.”

END_OF_DOCUMENT_TOKEN_TO_BE_REPLACED

WINNIPEG, MB – Red River College ranked sixth out of 50 Canadian research colleges and polytechnics, having posted $5.82 million in research income during the 2013 fiscal year. The ranking is based on Canada’s Top 50 Research Colleges List, released October 22 by Research Infosource Inc.

The College moved up in rankings from last year, where it placed seventh with $4.37 million in research income.

“Red River College has been a leader in applied research over the last decade, and we’ve seen a steady increase in research income each year,” said David Rew, Interim President & CEO, Red River College. “Applied research is an integral part of our overall strategy – it contributes in a very productive way to our communities and the experience of our students.”

Red River College is best known for its applied research capabilities related to extreme climate and cold weather technologies and applications, but several other research thrusts are rapidly emerging.

END_OF_DOCUMENT_TOKEN_TO_BE_REPLACED

WINNIPEG, MB – Today, Red River College’s Early Childhood Education (ECE) program in partnership with IKEA Winnipeg join with children’s organizations around the world for the 2014 Global Cardboard Challenge — an event that encourages kids to harness their imagination and creativity while turning everyday household items into treasures.

Inspired by Caine’s Arcade — a short film about a young boy whose cardboard creations triggered a worldwide movement celebrating the “power of play” — the event is organized globally by the Imagination Foundation, a not-for-profit dedicated to raising the next generation of innovators and entrepreneurs.

“IKEA is a key corporate partner for this community event,” says Louise Gordon, dean, Health Sciences and Community Services, Red River College. “Their willingness to provide supplies, staff, and expertise is vital to making this cardboard challenge a reality and Red River College is grateful for their support.”

Red River College will host 60 children participating from four local childcare centres, one Aboriginal Head Start program, and one Winnipeg school. Each group of children will be paired with a team of adults comprised of one IKEA staff member and two second-year ECE students.

END_OF_DOCUMENT_TOKEN_TO_BE_REPLACED

The Healthy Minds Healthy College strategy is comprehensive and systemically based, recognizing everyone has a role to play in the positive mental health of the college community. The goal was to cultivate an environment of support that provides a sense of well-being, belonging, connectedness, and positive mental health for all students, faculty and staff.

“The advisory committee that came together in support of this initiative is to be commended,” said Laureen Janzen, Coordinator, Counselling and Accessibility Services (Chair), Red River College. “The vision of Healthy Minds Healthy College was to offer evidence-informed options to respond to the mental, social, psychological and spiritual needs of students, faculty and staff and the committee has exceeded those expectations.”

END_OF_DOCUMENT_TOKEN_TO_BE_REPLACED

As part of its commitment to improving opportunities and outcomes for Métis people in Manitoba, Red River College has entered into a new memorandum of understanding (MOU) with the Manitoba Metis Federation and Louis Riel Institute.

Signed this morning at RRC’s Roblin Centre, the new MOU creates a joint working group with representation from all three organizations — one that focuses on education, business and growing industry partnerships to increase economic prospects for Manitoba’s Métis populations.

In addition, a new $400,000 bursary for Métis students was announced — one made possible through matching $200,000 investments by the MMF and RRC.

“[Today] signals an extremely satisfying phase of accomplishments for Red River College,” says RRC President Stephanie Forsyth. “Driven by the mission of the College and that of our Strategic Plan, [this] announcement reflects our goal of serving the educational needs of Aboriginal students.”

“The collective efforts of those involved … will benefit Métis people in Manitoba [by] improving access to training and employment opportunities,” says David Chartrand, President of the Manitoba Metis Federation. “We applaud Red River College for their leadership and contributions towards today’s announcement.”

In a case of perfect timing, Red River College will wrap up the Victoria Day long weekend by getting ready to welcome actual royalty to its Exchange District and Stevenson Campuses.

On Wednesday, May 21, the College will play host to Prince Charles, Prince of Wales, and his wife Camilla, Duchess of Cornwall, as part of a four-day excursion to Canada that also includes stops in Nova Scotia and Prince Edward Island.

On Wednesday morning, the royal couple will tour RRC’s Stevenson Campus, where they’ll be greeted by Canadian Prime Minister Stephen Harper, St. Boniface MP Shelly Glover and RRC President Stephanie Forsyth, among others. The couple will arrive just in time for Aviation & Aerospace in Manitoba Day, an annual event that showcases the province’s thriving aerospace and aviation industry for the benefit of more than 700 Grade 6 students.

Later the same day, Prince Charles will join President Forsyth for a tour of RRC’s Roblin Centre, where they’ll be joined by representatives from Prince’s Charities Canada, an organization that works with existing Canadian charities on a number of core objectives.

The last time RRC hosted visiting royalty was in 2002, when Prince Philip took part in the opening of The Roblin Centre (then called the Princess Street Campus).

A total of $327,842 was awarded as part of NSERC’s College and Community Innovation Program Applied Research Tools and Instruments grants.

“This funding allows us to purchase and install specific research tools and equipment that will have an immediate impact on our applied research capacity across several industrial sectors,” said Stephanie Forsyth, President and CEO of RRC.

The tools and equipment being purchased and/or built include an EV rapid charging station and battery testers, a building envelope test chamber to test wall sections and materials, and new end-of-arm and imaging tools for existing robotics.

“These are assets that will directly support our industry partners’ research and training needs as well as enhancing student and instructor applied learning at the College,” said Ray Hoemsen, Director of Applied Research & Commercialization at RRC. “They support our strategy to drive Manitoba’s economy in an innovative and sustainable way.” END_OF_DOCUMENT_TOKEN_TO_BE_REPLACED

Sign up to get Red River College Polytechnic news releases delivered directly to your inbox.