NOTE: The following was researched and written by Red River College Polytechnic students.

It all started with vision- a vision that no one in the Philippines should live in the dark. Sustainable Alternative Lighting or better known as SALt was founded by Engr. Aisa Mijeno in 2014 (SALt Philippines). The company first made itself known only through its website in August of 2014 and eventually followed by the registration of the company and patent of the product the very next month. The company produces LED lamps that is powered by salt and water mixture (sea water). The company describes its product as “Sustainable and cost effective ecologically designed lamp activated by water and salt” (SALt Philippines). The lamp also has a USB port wherein users can charge their mobile devices. “This lamp is not just a product, but a social movement” (SALt Philippines). 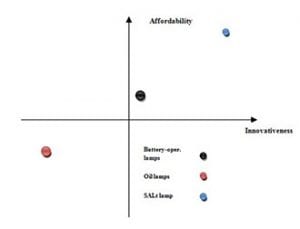 The use of LED lamps is popularized in the Philippines because of its efficiency, affordability and level of power consumption (Philips Ph). The problem is the access to electricity. Roughly 15% of the world population has little to no access to electricity (World Bank) and more than 16 million Filipinos basically live in the dark (Gonzales). Exhibit 1B. SALt plans to target this market and go head to head with its main competitors, candles/oil lamps that are affordable but relatively unsafe, and battery-operated lamps that are safe but costly. SALt lamp’s edge is that compared to battery-operated lamps ($92/year) and oil lamps ($180/year) it only needs around $23/year to maintain supply of table salt and anode rod used (YouTube). Additionally, because of SALt lamp’s technology, it is very safe compared to oil/kerosene lamps and candles which are some of the most common causes of house fires in the Philippines (Exhibit 1E) (Gumela).

The company is currently in the mass production stage and does not have a physical store. However, they are trying to accommodate orders as much as they can online (SALt Philippines). For the pricing, the CEO has mentioned on interviews that they will make it as affordable as possible (YouTube). Living with the natives, Aisa knows that money is scarce and that it is impossible for them to afford the lamp that may cost about $15-20 per unit and the anode rod that is replaceable every six months that is about $7. With this regard, the company is adapting the TOMS’ business model (TOMS), “one for one”, wherein for every lamp that the company sells, one lamp will be given to a family in need (Dickmark).So far, the company has successfully given around 870 lamps to some remote communities in the Philippines (SALt Philippines). One out of five people in the world has no access to electric lighting (Tamulaitis)

As a start-up business, SALt has a very small size of work force. This consists of the siblings, Aisa and Raphael Mijeno, the CEO and the CFO respectively (Exhibit 1D), Delia Bahena, the head of CSR department of the company and several of their workers and volunteers all over the Philippines .The company is currently in its mass production stage and is also looking for partnership with local and international organizations to fund their production. As what Aisa Mijeno has said, “We have the passion, but we need a support system both from the private sector and government to mentor us and guide us” (Gonzales).

SALt lamp is made of tediously experimented and improved chemical compounds, catalysts, and metal alloys that when submerged in electrolytes will generate electricity (Buccat).This lamp uses the science behind the battery making. Basically, the salt water only helps the breakup of the anode electrode that when immersed in the solution produces electricity (Dimacali). For a solution of a tablespoon of salt and a glass of water, the lamp can be used for about 8 hours. Those living in coastal communities may even just get ocean water instead of buying salt to make their own salt-water solution (Cruz).

A product is not an innovation until it is conceived as new (Kotler) .SALt lamp’s technology is based on a simple concept of Electrodes plus Electrolytes equals Electricity. The lamp uses an anode rod technology based on the “Galvanic cell theory” (SALt Philippines) that changes the electrolytes to a safe salt solution that will then boost the power of the anode rod making it last for about six months to one year (YouTube). The company prides three things about the product; its safety, cost-effectiveness and environment friendliness (SALt Philippines). The lamp also does not emit harmful gasses and leaves minimal carbon footprint making it environment-friendly (SALt Philippines), for a reasonable price. Aisa Mijeno claims that the lamp may the first but definitely not the last product of the company. Her vision is to make seawater power plants that fuel the entire island in the Philippines, and beyond (SALt Philippines). Given the SALt lamp’s innovative technology and affordability, this technology could be the one that will light the whole Philippines in the future, saving the people high cost of electricity (Anonuevo).

Like any other start-up entrepreneur, Aisa Mijeno had a vision but limited resources. SALt, against all odds was introduced to different organizations and companies around the world for funding (SALt Philippines). The product and the founders have received awards and recognitions both locally and internationally. One of the biggest recognitions the company had was when the CEO received a call from the Whitehouse inviting her to speak on a panel with none other than US President Barack Obama and the e-commerce billionaire, Jack Ma (Philippine Star online), last APEC Summit of 2015 (Appendix 1C). Another interesting fact about the product is that the lamp can use any liquid, dirty water included, as long as it has salt/ electrolyte in it. This company does not only have one of the most innovative products ever invented in the Philippines but also the vision that has a great impact on Filipinos’ lives, today and tomorrow.

With more than 200 full- and part-time degree, diploma and certificate options, plus many courses available part-time and online, RRC Polytech provides flexible, accessible, quality education designed to help you succeed.